From Under a Bus to Top of the World 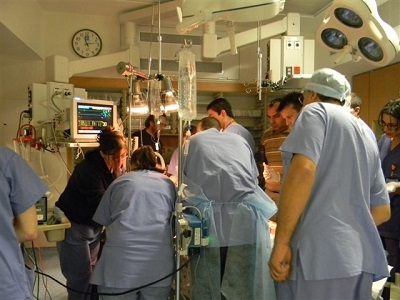 Liana Alverez was walking up the steep roadway to Jerusalem’s King Solomon Hotel during a Jewish Women’s Renaissance trip to Israel when suddenly a bus came careening down the hill. There was no way to dodge it.

Liana, 36, tumbled and screamed, “Stop, stop, stop!” But the bus landed on top of her. “Loads of people were there,” she recalls. “I was feeling woozy. There were sirens. My clothes were being cut away, but I wondered why they weren’t taking me out from under the bus.”

Liana had not realized she was wedged under one of the wheels. The Fire Department had to jack up the bus to free her.

When Liana arrived at Hadassah Hospital, Dr. Miklosh Bala, Director of the Trauma and Acute Care Surgery Unit, was waiting for her. “She was very badly injured and in shock,” he relates, “so that she couldn’t understand the enormity of what had happened to her.”

Liana was like a puzzle that needed to be put together again, Dr. Bala explains. It was difficult to decide what to do first. They needed to open her stomach. They needed to close off the bleeding arteries. The orthopedists needed to fix the broken bones. She had an open pelvic fracture from which 50 percent of patients die. “The initial treatment of an open pelvic fracture is critical in order to save the patient’s life,” notes Prof. Rami Mosheiff, head of Hadassah’s Orthopedic Trauma Unit.

Liana was sedated and intubated and a multidisciplinary team of experts was summoned. She underwent several surgeries, including an urgent angiography to treat the internal bleeding into her pelvis and several other procedures to deal with her soft tissue injuries. Dr. Bala explains, too, that her damaged muscles and destroyed skin added to the challenge of managing her case because necrosis (death of the tissue) and infection are a great worry. Liana had to be anesthetized just to change her bandages.

“Having a private room for her made all the difference,” comments Dr. Bala. “She had a much better chance of surviving in the new Sarah Wetsman Davidson Hospital Tower.” Nevertheless, although optimistic, Dr. Bala did not allow himself to take one vacation day while she was under his care. “One slip up and she would die,” he said.

It helped, too, that Dr. Bala spoke Russian because Liana was born in Baku, Azerbaijan and her native language was Russian. Dr. Bala, who was born in Russia, immigrated to Israel after finishing medical school there, having graduated from Moscow Medical Academy and Grodno State Medical University, in Rodno, Belarus. Dr. Bala did his residency in surgery at Hadassah, beginning in 2000, when the intifada began. His experience with terror victims exposed him to trauma medicine in which he later specialized. Dr. Bala is married to a physician and one of this two children served as an Israel Defense Forces medic during Operation Protective Edge last summer.

“Thank goodness, the treatment went like clockwork,” Dr. Bala comments. “And Liana was a remarkable, upbeat patient, who did everything we asked of her to get her better.”

“The doctors are brilliant,” she says. “I know they saved my life.”