A Devoted Hadassah Geneticist and the Mexican Jewish Community Project 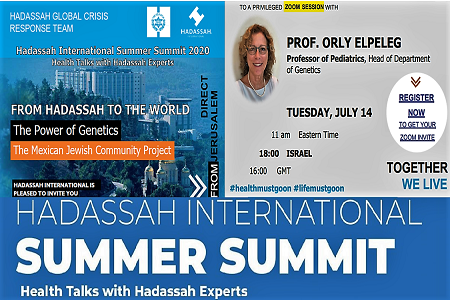 About 15 years ago, the Hadassah Medical Organization (HMO) initiated an “undiagnosed patients’ program” to identify the causes of diseases that didn’t fall into any known categories. Today, under the direction of Prof. Orly Elpeleg, head of the Department of Genetics, Hadassah has identified 100 new disease-causing gene variants responsible for medical conditions both mild and severe. These variants are collected into a database called HADASSOME.

Because of the close relationship between HMO and the Mexican Jewish community, a long-time connection that was facilitated by Hadassah Mexico, Prof. Elpeleg joined forces with its community leadership to create the Mexican Jewish Community Project. Thanks to gene sequencing of 113 Mexico City Jewish couples, this cutting-edge creation now has a database of over 300 exomes, the coding part of an individual’s DNA. As Prof. Elpeleg explained in a Hadassah International July 14 webinar, while exomes comprise only 1 to 2 percent of our DNA,  85 percent of disease-causing mutations reside in the exomes. Frequently, a mutation in a single letter or two within the human genetic sequence of three billion letters can cause a disease. The goal is to link a particular medical condition and a mutation.

“For rare genetic diseases, the best therapy is prevention,” Prof. Elpeleg emphasized, since “in 95 percent of rare diseases, there is no therapy.” But that doesn’t stop Prof. Elpeleg in her constant search for ways to treat these maladies.

Within some communities, there are “founder mutations,” variants that are common in the population. It has been known for quite some time that many Ashkenazi Jews, for example, carry founder mutations, even though the people are not related. To prevent the transmission of a severe genetic disorder to the next generation, couples can choose prenatal screening for 100 of these variants.

In the past 3 years, Hadassah has identified disease-causing founder mutations within the Syrian Jewish community of Mexico. Its leaders asked Hadassah to help them identify carriers of these variants.

The Mexican Jewish Community Project is just beginning its third segment. The first was completed in February and the second in May, with a combined total of 113 couples having their exomes sequenced. When COVID-19 interfered with in-person consultations, Hadassah switched to Zoom meetings with the couples. During the 8 days from May 3 to 11, Hadassah conducted seven Zoom meetings, each 3 hours long. In total, 166 individuals met with Hadassah experts to discuss their exome analysis. “It was a marathon,” Prof. Elpeleg commented.

As Prof. Elpeleg explained, the participants were informed about particular disease-causing variants, as well as secondary “actionable” findings that would predispose them to heart problems or cancer for which they could take some preventable action, such as monitoring by a cardiologist or having mammography or colonoscopy earlier than recommended for the general population.

Giving participants a sense of how gene variants are identified and linked to a particular disease syndrome, Prof. Elpeleg shared the story of a little girl of North African descent who, at the age of about 6 months, experienced weakness in her lower legs during a bout with a fever-causing illness. She recovered but then, at about age 2, she contracted another similar illness. This time, her upper arms grew weak, and she became a patient of Prof. Elpeleg. The parents were frantic because they had already lost a son at the age of 5 from the same undiagnosed disease. Prof. Elpeleg searched the country for other families of North African descent with a similar sort of illness, and she found three. After further exploration with colleagues, Prof. Elpeleg identified the CD59 gene variant as the culprit. The child’s myelin, the insulating layer of peripheral nerves, was being attacked. Prof. Elpeleg found an FDA-approved drug called Eculizumab that, though targeted for another illness, proved effective for this genetic disorder. “It is not a cure; it is a therapy that is needed every 21 days,” Prof. Elpeleg explained. To identify a therapy, Prof. Elpeleg added, “you must put your finger on the exact error.”

Reflecting on the Mexican project, Prof. Elpeleg noted with admiration, “What the Mexican Jewish community has done is cutting-edge. This is a community that cares for each other.”

The webinar was part of the Hadassah International Summer Summit 2020 “Health Talks with Hadassah Experts,” which attracted over 6,000 listeners from 35 countries.