A Double Stroke at the Dead Sea 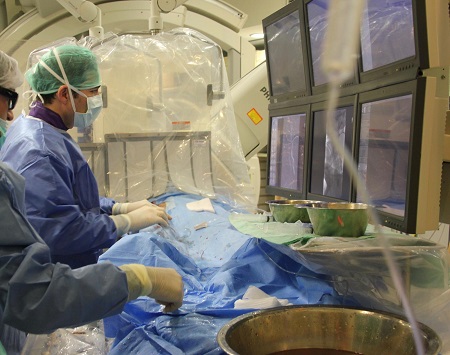 Imagine having a double stroke in two different arteries while on a day trip at the Dead Sea! What could be the chances of survival?

Last week, Avi, age 57, was on a day trip at the Dead Sea. He turned to his wife, and suddenly he couldn’t speak. His face twitched and he collapsed.

The moment the helicopter landed, Hadassah’s stroke protocol was activated. Prof Cohen, together with Dr. Zvika Skagio, performed a cerebral catheterization. “In this patient, we found ourselves facing severe blockages in both the left cerebral artery and left carotid artery,” report the doctors. “At the least,” they explain, “these blockages were liable to lead to severe disability and serious damage to his quality of life. He could also die. Happily, our patient recovered quickly and the next day, he was walking and talking clearly. After a few days of hospitalization, he was able to be sent home in good condition.”

Prof. Ronen Leker, director of Hadassah’s Stroke Service and Cerebrovascular Disease Research Laboratory, received the patient after his catheterization. “Had the teams not worked quickly—less than an hour from the stroke to the angiography room–the patient was likely to die. The patient’s rapid recovery from a life-threatening situation is due not least to the high skill level of Prof. Cohen and his staff. The speed allowed them to provide optimal treatment.”

And the patient himself? “I remember trying to talk to my wife in a souvenir shop. First, the Zaka volunteer rescue team came and then Magen David Adom. Then I woke up at Hadassah after my life was saved.” Avi’s wife, Inge, who drove to Jerusalem, said, “I arrived when he was already in the operating room and waited frantically. I’m really surprised that he’s already home and okay, because I know what would have happened if he hadn’t received such excellent care. It was traumatic, but we are slowly recovering and want to thank everyone who saved his life. It was a miracle.”