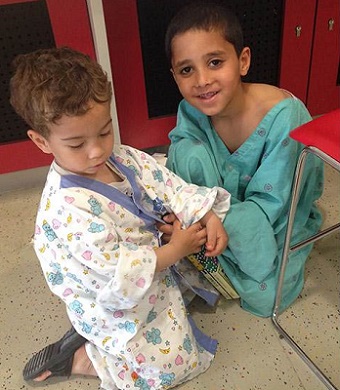 Dr. Guy Hidas and Dr. Bilal Abu-Sbeih are two physicians whose shared concern for their patients is achieving outcomes that most diplomats can only dream about.

Dr. Hidas, a pediatric urologist at the Hadassah Medical Organization, and Dr. Abu-Sbeih, a urology resident in the same Urology Department, have jointly treated many Israeli and Palestinian children. Recently, they successfully fixed a penile birth defect on two boys from Gaza ––Ahmed, age eight and Faris, aged three. Initially, these children were operated on in Gaza multiple times, but without success. Fortunately, the specialists’ expertise led to a good surgical reconstruction. “Hopefully, the children will heal well,” says Dr. Hidas.

Another major surgical challenge the physicians deal with is a disorder of sexual differentiation among children from Gaza–an abnormality which results from consanguinity (marriages between first cousins). “The baby is born with ambiguous genitalia and we are not sure if the child is a boy or a girl,” Dr. Hidas explains. “The pediatric urology team at Hadassah,” he continues, “is well trained and experienced with correction of this major inborn defect. After gender assignment, we operate on those babies and create the desired functionally and cosmetically correct genitalia.”

These surgeries are made financially possible thanks to funding from Project Rozana, an Australian-inspired multi-faith initiative, spearheaded by Hadassah Australia. Through this project, Hadassah is training Palestinian medical staff and health workers at Hadassah so they can return to their communities and build the health capacity there. In addition, Project Rozana provides top-up funding for critically ill Palestinian children to remain at Hadassah when Palestinian Authority (PA) financial support ends.

At present, the Palestinian Authority does not have a pediatric urologist. Having studied general urology for three years in the West Bank, Dr. Abu-Sbeih has now been training for about one year at Hadassah. Dr. Abu-Sbeih was born in Jerusalem; his mother and all his uncles are from Jerusalem. “I used to work in the Ministry of Health for the PA, so I know doctors there and nurses and heads of departments and managers,” he says. “I have friends from all over the Middle East. Everyone knows I am working at Hadassah, home of one of the biggest and strongest departments of urology. So for any complicated case, they are in contact with me. I bring the pictures, the CT Scans, the summaries of the illness. I put them in front of Guy, who helps me find a solution—from diagnosis to intervention–with surgery as the last step.”

Shortly, thanks to Hadassah, Hebron will have its own pediatric urologist. As Dr. Abu-Sbeih says, “If I can learn to do the surgery at Hadassah, I can do it in Hebron.”