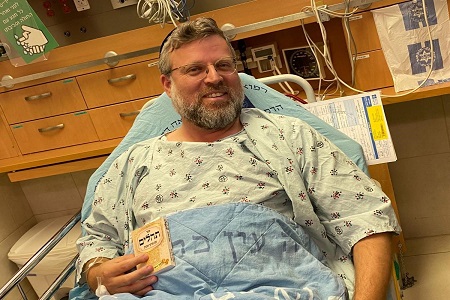 Rabbi Zeev Katzenbogen, 46, lives in the Jewish Quarter of the Old City (of Jerusalem) with his wife and eight children. He hops down to the Kotel (Wailing Wall) every morning to catch a minyan for prayer. But recently, a terrorist with a semi-automatic weapon went on a rampage nearby. Katzenbogen, in a hurry, was still wearing his tefillin (or phylacteries, is a set of small black leather boxes containing scrolls of parchment inscribed with verses from the Torah) when the bullet hit him in the arm. Although he was moderately injured, the tefillin stopped the bullet from crossing through his arm to his heart.

From his hospital room in the Sarah Wetsman Davidson Hospital Tower, he said: “A person got up in the morning to commit murder and I was one of those he tried to kill, in the place where we will celebrate the rededication of the Temple on Hanukkah. I got my life back as a gift and can go home to my wife and children.”

“I thank G-d for the miracle of surviving and thank the staff and the supporters of Hadassah for being G-d’s emissaries on earth.”