International ConnectionsNews from Our Units19 April, 2015 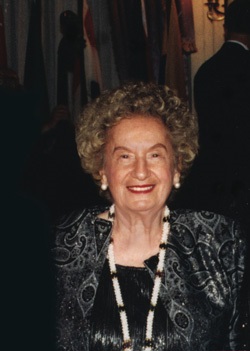 What factors conspire to propel a Public High School teacher and part-time copywriter to become one of the most influential women of the 20th century?

The daughter of a furniture retailer, born in Brooklyn, New York in 1913, Bernice was raised during the most dramatic years of our history.  Two world wars, one of the worst economic depressions, followed by the worst genocide in history, helped to shape her and to develop the skills necessary to perform extraordinary deeds.

What determination impelled her to fly to Nairobi during the peak of the Cold War, and ask President Reagan to publicly repudiate the 1975 United National Resolution equating Zionism as “a form of racism and racial discrimination!”

Bernice dedicated over two-thirds of her “long life” (67 years) to Hadassah and Israel.  Her achievements are legendary: throughout her stellar career she remained

focused on the most relevant issues affecting Hadassah as the leading Medical Center in Israel and in its worldwide outreach.

In today’s business world, we tend to “tag” people according to pre-established standards.  Trying to tie Bernice to one title is to minimize her potential, not only as a great leader, but as a dreamer and visionary.  She acted when needed, she was not stopped by paradigms or what others might do or think.  She did what she truly believed was correct.

Bernice always saw the big picture, but understood that the “devil lies in the details.” She will be remembered as the Architect of Hadassah International and countless other initiatives to benefit Hadassah and Israel.

When Bernice invited me to become part of Hadassah International, her aim was to enrich the pool of resources, to expand its effect. When I consulted with her, she asked brilliant questions and shared “out-of-the-box” ideas to increase the ranks of our stakeholders.

Our role today is to identify the next Bernices, to embraces them, nurture them, empower them and make sure that tomorrow there will be many women and men to step up to fill her shoes!

Some people do not live to see the results of their work.  Bernice was blessed with a long life, living every day of her life fully and tasking all of us to remain relevant and to inspire those around us.