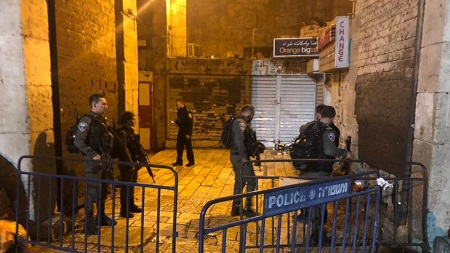 Liza Nataf, 19, a “lone soldier”* from France, is a Border Policewoman who was injured in the leg when a terrorist attacked her and a companion at the Damascus Gate to the Old City of Jerusalem on December 13th, 2018. Lisa was taken to the Hadassah Hospital at Ein Kerem.

She was later transferred to the orthopedics department at Mount Scopus where she was treated by orthopedist Dr. Adi Fridman, the Hadassah arthroscopy team knee expert.

Liza’s mother, who lives in France, was visiting Israel for Hanukkah, and was able to be with her daughter in the hospital.

Lisa was released from the hospital this week.

*A “lone soldier” is a soldier in the IDF who does not have any family living in Israel.