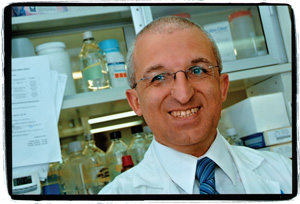 Hadassah doctors, working with a medical school in the United States, are researching a groundbreaking liquid therapy to target and prevent autoimmune diseases.

Sometime in the next decade, there may be a prescription that reads “One teaspoon to be taken each morning with breakfast for one month.”

Thirty days later, the patients who follow these directions and swallow the liquid daily will find themselves free of their diabetes, lupus, multiple sclerosis, rheumatoid arthritis, Crohn’s disease, ulcerative colitis or whichever of the more than 80 other distinct and crippling auto-immune illnesses dispatched them to their doctor.

“All existing therapies for autoimmune disease target the immune system’s ‘soldiers,’ the cells that are tasked with fighting off intruders but which have instead gone rogue and attacked the self,” says Dr. Yaron Ilan, director of the Department of Medicine at the Hadassah–Hebrew University Medical Center in Jerusalem. “Our treatment is a new concept: It addresses the ‘commanders’ that control the ‘soldiers’ and brings them back into line.”
This orally administered treatment for autoimmune disease, with its potential to end so much suffering for so many, is now in phase-2 clinical trial. A combination therapy, it joins two molecules and two scientific institutions. One molecule was developed at Hadassah and the other at the Harvard Medical School and its teaching affiliate, the Brigham and Women’s Hospital, both in Boston. This merging of the intellectual property of the Israeli and American centers in an equally owned joint scientific venture is among the first times in its history that Harvard has ever shared its intellectual property.

“We take great pride in working alongside such esteemed partners,” says Dr. Shlomo Mor-Yosef, director general of the Hadassah Medical Organization. “We share a firm commitment to developing groundbreaking therapies for life-altering and life-threatening diseases. We believe our joint venture will make a significant impact on existing treatment protocols.”

The molecules that comprise the new medication come from different sources; Hadassah’s is derived from soy.

“We came across it by chance in patients with Gaucher disease,” says Dr. Ilan. “These patients naturally have a high level of this molecule in their blood, and we saw a corresponding increase in them of the cells that regulate the immune system. We added one and one, and realized that this molecule has great potential as an immune-modulating medication.”

Currently under development at Hadasit, Hadassah’s technology transfer company, this molecule is a glycolipid, one of a class of soluble lipids. Preclinical studies and a first clinical study have shown that it meets two vital conditions: It can be taken without adverse side effects and it has a profound modulatory impact on the immune system.

The molecule developed at Harvard is, by contrast, a monoclonal antibody, known as anti-CD3. “Monoclonal antibodies are widely used in medicine intravenously but have never been given orally in humans,” says Dr. Howard L. Weiner, Robert L. Kroc Professor of Neurology at Harvard Medical School and director of the Partners Multiple Sclerosis Center at Brigham and Women’s Hospital. “This monoclonal antibody, [like] the glycolipid compound, has a stand-alone therapeutic effect in correcting imbalances in the immune system. However, animal models have shown that combining it with the Hadassah-developed glycolipid stimulates the immune system more efficiently and elicits a stronger, additive effect.”

Drs. Weiner and Ilan know each other well. Both have, for years, led teams studying oral tolerance and have tested a number of molecules. They fine-tuned the therapy now being tested during a Sabbatical last year that Dr. Ilan spent in Dr. Weiner’s lab at Harvard. “We saw that this new medication changes certain cells in the walls of the small intestine,” says Dr. Ilan. “Together, the two molecules increase the blood cells that regulate the immune system, and thus boost the functioning of the immune system as a whole.”

The first tests were carried out in different animal models. “To our delight,” he says, “we saw that the therapy reduced diabetes (Types I and II) in diabetic animals, decreased lipid levels in their blood, improved their liver function and reduced the amount of fat in the liver. It is, in fact, the only medication in the world that reduces fat in the liver.”

Accumulation of fat in the liver, known as nonalcoholic steato-hepatitis (NASH), can lead to end-stage liver disease. It is a growing health problem in the Western world, already affecting one in every 10 people there, and is on the rise. Add to that the hundreds of thousands battling autoimmune diseases and it’s clear that this new therapy, if viable, has blockbuster potential.

“The number of patients with one of these illnesses caused by an immune response misdirected against their own organs, tissues and cells is increasing all the time in the West,” says Dr. Ilan. “A probable explanation is that urban life is becoming more and more sanitary, with youngsters minimally exposed to common antigens, the substances that prompt the generation of antibodies and engender an immune response.”

This theory is supported, he adds, by the fact that autoimmune illnesses are less common among people living in rural areas, who are regularly exposed to animals and common dirt. A Swedish study, in fact, found much less asthma among children growing up in homes where there were animal feces. Contrast this with the steep rise in asthma in urban youngsters.

After extensive testing in animals, the first clinical trial of the Hadassah-Harvard compound was performed in February 2008 at Hadassah in Jerusalem on 18 healthy volunteers. The trial’s purpose was to examine the medication’s safety and dosage and monitor for immunologic effects.

“Carefully constructed, it was considered by many in the scientific world to be one of the most complicated clinical trials ever conducted in human immunology,” says Dr. Ilan.

The data produced were analyzed simultaneously in Israel and the United States. The results were equivalent: The labs at both Hadassah and Harvard showed the drug to be safe and to induce an immune response. This, in itself, was an exciting finding, according to Dr. Ilan, as it is the only medication to affect the immune system without side effects.

The promising results of this first clinical trial have encouraged the Hadassah research team to establish a commercial company, Orammune, to refine and produce their molecule. Meanwhile, 18 physicians and researchers in Dr. Ilan’s lab are synthesizing it in, it is hoped, an improved formulation.

This will be used in the phase-2 clinical trial now being designed for patients with diabetes, hepatitis and multiple sclerosis. Fifty people are being recruited for phase-2, scheduled to begin later this year and conducted simultaneously at Hadassah and Harvard. Hadassah will test those suffering from hepatitis or diabetes; Harvard will test those with multiple sclerosis.

While progress thus far has been smooth and rapid, it will be at least five years until the therapy comes on the market, if not much longer.

“At this stage, we don’t even know whether our compound will be a treatment or a full cure,” says Dr. Ilan. “But we’re optimistic. We believe the trials will show that it has the capability to repair the basic defect that triggers the autoimmune disease process, and will thus be effective against the whole range of such illnesses. And this is a belief shared by several pharmaceutical multinationals, which show interest in investing in our project.”