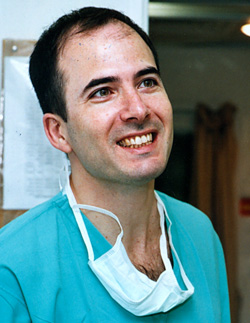 When during Sabbath dinner, their father’s speech suddenly became garbled and he complained of weakness on his right side, his daughters rushed him to the Hadassah Medical Center’s Judy and Sidney Swartz Center for Emergency Medicine, where Hadassah’s cutting-edge clot-bursting procedure saved his life, leaving no neurological damage.

When the father arrived at Hadassah, neurologists immediately evaluated him and performed a CAT Scan, which revealed a severe blockage in one of the main arteries supplying blood to his brain. They transferred him to the Invasive Neuroradiology Laboratory, where Prof. José Cohen, Director of Endovascular Neurosurgery, re-opened his blocked artery. “We used a stent as a kind of ‘micro-hand’ to capture the clot, allowing us to remove it from the artery,” Prof. Cohen explains. The next morning, Yair woke up with the ability to speak fluently and move his limbs freely.