Alma and Burt Krull: Inspiring Generations With Their Generosity 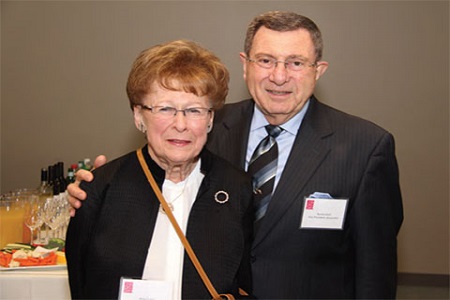 Longtime Hadassah supporters Alma and Burt Krull have always lived by the ideal of the Hebrew word trumah. “Not only does it mean donation, but it also means to lift up, to elevate,” relates Burt from his home in New York City. “That’s what we have wanted to do. That’s what Hadassah does every day.”

When Alma, Burt’s beloved wife of 61 years, passed away, Burt felt the fitting way to memorialize their life together was to donate a beautiful tzedakah box to the Hadassah Medical Organization. The donation box was recently installed in Hadassah Hospital Ein Kerem’s Fannie and Maxwell Abbell Synagogue, where the 12 world-renowned Chagall windows depict the blessings biblical Jacob bestowed on his sons.

Cherishing family and a strong identification with the practical Zionism of Hadassah defined the Krulls’ 61-year marriage.

“Alma was smart, classy, proud of her Jewish heritage, an advocate for all human equality, charitable, and relentless in her fundraising efforts for Hadassah,” says Burt. “She was honest and hardworking, a math teacher, a dedicated mother, a grandmother, and a great-grandmother, a lover of classical music and opera, an ardent reader, and an excellent cook and baker. Most of all, she was my most loving and caring wife for almost 62 years.”

Alma served as president of her local Hadassah chapter in Brooklyn and vice president of the Brooklyn Region of Hadassah. She specialized in cultivating major donors by setting an example herself. Burt shared her values and enthusiasm.

“At first it was her organization and I schlepped chairs to every meeting,” he says. “We had dinner parties and organized special events so that Hadassah also became our friendship group.” Eventually, Burt was named National Executive Vice President of the Hadassah Associates.

“Alma believed that people should not only care about their own needs but also actually help others,” says Burt. “She was actively involved in the mitzvah of tzedakah. She invested her time, her energy, and her money to help Hadassah. She tirelessly volunteered for Hadassah. It’s amazing what she accomplished.”

It’s a sentiment echoed by family friend and Deputy Executive Director of Hadassah’s Office in Israel Barbara Goldstein. “When Burt and Alma moved to Manhattan, Alma continued her work for Hadassah in Brooklyn,” says Goldstein. “She kept the place going. She loved Hadassah. She loved the women and she was an amazing fundraiser. She inspired her daughter so that they would pass the torch from generation to generation.”

Two years ago, soon after Alma’s death, Burt and eldest daughter Julia equipped a kitchen for families whose loved ones were hospitalized in the intensive care unit of the Sarah Wetsman Davidson Hospital Tower. His daughter Aileen followed by funding a hospital room in the pediatric diabetes ward.

What is the secret of the Krulls’ success in transmitting the value of giving to the next generation? “When my wife arrived home each day at 3:30 after teaching school, she was busy with Hadassah and raising three daughters. Ever since our grandkids and [16] great-grandkids were old enough to understand, we said to them whenever we gave them a gift, ‘You have to give a portion of this gift to the poor.’ If you begin when they’re young, it becomes part of their personality and what they do. Parents have a responsibility. They have to give until it hurts.”

The contemporary tzedakah box, made of metal and glass, has cut-out letters that allow a hint of warm green light to reflect through the wording, complementing the quiet of the glass. “Strength and dignity her clothing, charity and chesed her passion,” it reads.

Artist Eyal Goldstein, who created the work, explains, “When a person asks for charity, he reveals a need in himself, an exposure that allows you to see inside and help him. The glass box represents the person, and the metal represents the covering the person wears to maintain his privacy.”

Burt believes that the COVID-19 pandemic needs to impact how people look at the world. “The message now has to be tikun olam, repairing the world,” he says. “This worldwide virus has changed the way we do things. Families have had to learn to live together, do things together, educate each other. They’ve had to learn to become one instead of separating into different wants and needs. I think the future is more optimistic because of this. People are more concerned with mutual help and reaching out to others.”