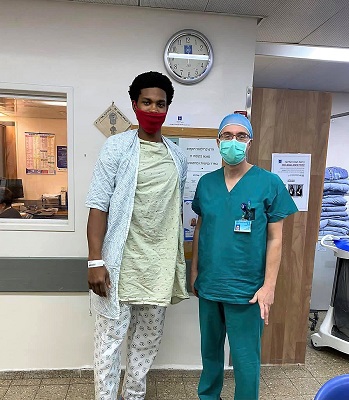 Malcolm Hill, an American basketball star who now plays for Hapoel Jerusalem, underwent successful hand surgery at Hadassah Hospital Mount Scopus on November 12, after having been injured in a playoff game earlier. Hand surgeon Dr. Shai Luria reports that all went as hoped for.

Hill, age 25, was a four-year starter for the Illinois basketball team Illini. As reported in 247Sports.com, Hill is the number three all-time leading scorer in Illini basketball history. He has also played in three other countries during the last three years: the Philippines, Germany, and Kazakhstan.

“Not too many people can say they’ve been to Kazakhstan,” Hill said. “No one even knows where that’s at. . . . It’s going to be a memory I’m going to have with me forever just like every place I’ve been to, because I’m all about building relationships and meeting people. I love that.”