American Patient Returns to Hadassah to Say, “Thank You for Saving My Life”. 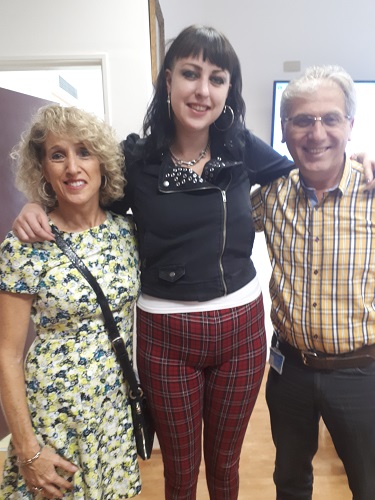 “Thank you for saving my life,” Jessa Perrin said, before asking if she could hug Prof. Rifaat Safadi, Head of Hadassah’s liver unit.

The Cincinnati resident and her mother Bonnie Ullner were in Israel for a cousin’s wedding. Wanting to personally thank those who had saved her life nine years ago, Perrin made a special pilgrimage back to the Hadassah Medical Center.

Perrin, then 16, was on a teen summer tour when she was diagnosed as a common stomach ache. It was probably the falafel she’d eaten, said the doctor in Haifa. But when the teens got to Tiberias and were about to spend a day hiking, the tour medic vetoed Perrin’s participation and insisted she go to the local hospital, today called the Baruch Padeh  Poriya Hospital. Suspecting liver involvement, the internal medicine staff phoned colleagues in Jerusalem where they have an ongoing arrangement with the liver unit at Hadassah Medical Organization.

“The last thing I remember was the ambulance ride,” said Perrin, who is now a journalism student at the University of Cincinnati.

She was unconscious when she arrived two hours later in Jerusalem.

In the Intensive Care Unit, the Hadassah staff tried to figure out why a teenager with no previous symptoms had acute liver failure and was close to death.  The patient couldn’t speak. The diagnostic tests included The BreathID® Testing Method, invented at Hadassah by Prof. Yaron Ilan and important in finding malfunctions of the liver. The hypothesis was that Perrin suffered from a rare genetic disease called Wilson’s, in which copper builds up in the body and suddenly turns lethal.

She would need an urgent liver transplant. Chances were better in the United States. Hadassah doctors consulted with American colleagues at New York-Presbyterian Hospital.  Although the American doctors do not usually put in an urgent call for a liver without first examining a patient, they trusted the report of the Hadassah doctors.

Sixteen passengers gave up their seats on the next El Al flight to New York and the Hadassah team flew with the unconscious patient. As Perrin’s plane approached New York, a liver was brought from Tennessee, from a seven-year-old who had just died there.

“It was a tense and difficult flight,” recalls anesthesiologist Micha Shamir. “We had an hour to outfit a plane as an intensive care unit. Something unexpected always happens on a flight and you have to be prepared.”

Her mother was waiting for her at the hospital in New York. Dr. Shamir made the local team hurrying with Perrin’s bed into the operating theater pause for a few seconds. “There is always time for a mother to give her daughter a kiss,” said Dr. Shamir.

Perrin woke up in the intensive care unit in New York, thinking she was still in Israel.  “I remember being angry that they’d taken out my piercings,” she said. “I was a silly teen who didn’t know she’d almost lost her life. But I’m beyond that now.”

This week at Hadassah, Perrin revisited the rooms where her life was saved and thanked the staff. She was excited to learn that the Liver Department will be moving to new updated facilities in Hadassah’s iconic Round Building as soon as renovations are completed.

Perrin was accompanied by her mother who after her treatment at Hadassah Medical Center became Cincinnati Chapter President of Hadassah, the Women’s Zionist Organization of America, the organization in the US that founded and still supports the Hadassah Medical Organization. They now have a new project — to support the Full Circle Campaign to renovate the Round Building so that others can also benefit from the outstanding work of the Liver Unit in a brand new facility.

Photo above: Jessa Perrin with her mother Bonnie Ullner and  Prof. Rifaat Safadi