Bedouin Child Will No Longer Limp, Thanks to Hadassah 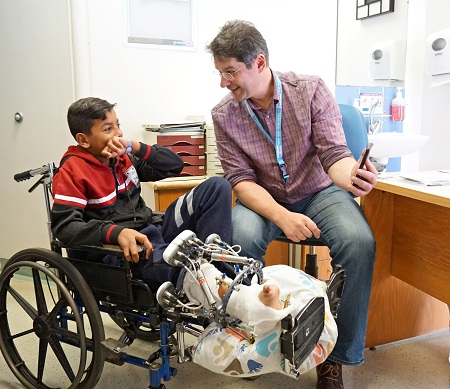 Ten-year-old Bahgat Sanaa from Rahat, a Bedouin city near Beersheba, was born with a rare condition that left him with misshapen hands and feet. One leg was also shorter than the other.

For his entire life, Bahgat has had to wear a shoe with an elevated heel to achieve balance. Not anymore.

Hadassah Medical Center physicians have rebuilt his ankle, and he is now undergoing a process that will extend his shorter leg an extra three and a half inches to make his two legs the same length.

“Bahgat has a rare malformation called tibial hemimelia, which occurs in one in a million people,” relates Dr. Vladimir Goldman, who heads Hadassah’s Service for Pediatric and Adult Limb-Lengthening and Deformity Correction. “Baghat only came to us recently,” he explains. “I was surprised to learn that Bahgat never underwent surgery to treat his malformations or to extend his leg. He had an awful limp and suffered physically and socially.”

Using Bahgat’s own bone from a part of the ankle that had some excess, Dr. Goldman first fixed the ankle and then began the complex process of limb extension, which is more difficult in a child with a malformation.

Conventional limb extension uses an external brace that the patient has to adjust manually four times daily for many weeks. It’s easy to forget a four-times-a-day routine or to misalign the device. For Bahgat, Dr. Goldman chose a “smart external fixation system” called OrthoSpin, which does not rely on patient compliance. Developed in Israel, the system is comprised of a strut powered by a lightweight motor and a control box placed on top of the circular frame. Automatically and continuously, it adjusts and lengthens the struts according to Dr. Goldman’s prescribed treatment regimen— without patient involvement. Dr. Goldman simply had to program the data into the system for his small patient, and now it not only automatically makes the adjustments, but also gives him feedback in real-time.

Hadassah was among the first medical centers to use OrthoSpin.

“To our delight, we were able to surgically restore the ankle so that the device fits Bahgat perfectly. The process is working, and I’m looking forward to a future when I see Bahgat walking to school with his friends and even taking part in class hiking trips. It’s wonderful!”