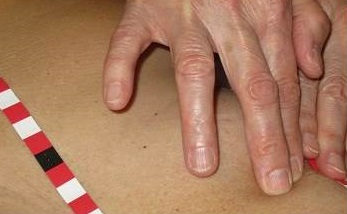 Thanks to a resourceful German gynecologist, a program entitled “Discovering Hands” gives blind women an opportunity for a life-changing career by capitalizing on their more acute sense of touch to help detect breast cancer. The Hadassah Medical Center is considering adopting the program.

The breast examination, which takes between 30 and 60 minutes, involves attaching self-adhesive orientation stripes with tactile orientation points to the patient’s breast in various positions. The breast is divided into zones, which enable the examiners to define the precise square centimeter where they detect an abnormality. In a study of 451 patients examined by this method, the specially trained blind women, called medical tactile examiners, discovered 32 abnormalities that were not identified by doctors.

The Ruderman Family Foundation, an organization based in Israel and Boston that prioritizes the inclusion of people with disabilities in the Jewish community, gave Discovering Hands an initial grant in 2013 to help expand across Germany and is now partnering to help further expand the program to other countries, including Israel and possibly the United States.

Read the full article in The Jewish Exponent at http://jewishexponent.com/lifestyle/2014/10/blind-technicians-trained-to-detect-breast-cancer-tumors?msource=LD