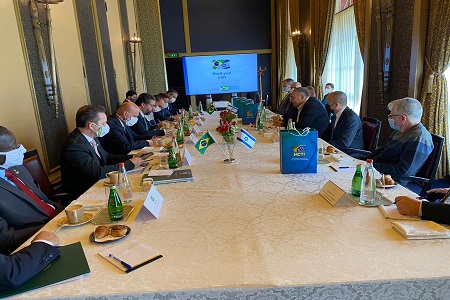 With the goal of tackling the high levels of COVID-19 within Brazil, as well as fostering scientific exchange in the life sciences, the Hadassah Medical Organization and the Federative Republic of Brazil have formed a collaborative partnership in research, protocol sharing, and innovation.

Meeting at Jerusalem’s King David Hotel on March 9, a delegation of high-level representatives from the Government of Brazil, the Hadassah Medical Organization (HMO), Hadassah International (HI), and the Hadassah Offices in Israel (HOI), formalized this strategic alliance, which will facilitate innovation in diagnostic tools and therapies—specifically zeroing in on infectious diseases and newly emerging viruses.

A “Letter of Intention” between HMO and Brazil’s Ministry of Science, Technology, and Innovation was signed, expressing the dedication of both Hadassah and the Brazilian government to this joint initiative. The partnership is particularly important at this time, as the number of COVID-19 infections continues to rise among Brazilians, while vaccination rates remain low.

The strong relationship that exists between the people of Brazil, Israel and the Hadassah Hospitals in Jerusalem will reach new levels with this partnership, resulting in significant benefit to both countries.