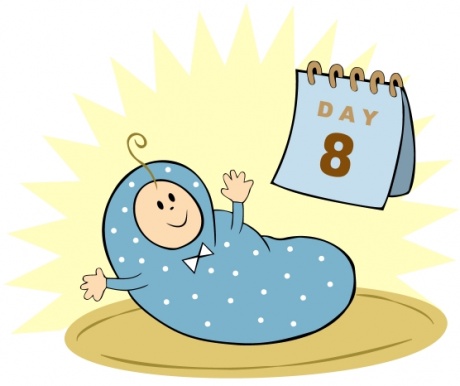 The Syrian-Greeks prohibited circumcision, Brit Milah, the first commandment specifically made for the Jewish people. There were even Jewish men who had plastic surgery to hide their circumcision! But today in Israel, the entrance into the Covenant of Abraham our father is a source of great joy and celebration.

You think you are in a hurry? Avi and Devora Kenig heard that their newborn son had been okayed for a brit milah after a medical condition was taken care of. He was eight days old and the sun would be setting in a few hours. It was important for the couple that the brit be on time. Could they get one organized at Hadassah Hospital before sunset?

Another couple they’d met while their son was hospitalized got into action on the phone. Around them the staff and relatives started working the phones.

The Mohel could come from Kiryat Menachem, the neighborhood closest to Hadassah.

Devora’s parents, already in Israel from Staten Island, New York, would hurry there with Avi’s parents who live in Jerusalem. They could fill in the minyan at the hospital. The Chagall Synagogue-what could be nicer?-was available. All they needed was wine. A bottle in the Hadassah office. Also a paper cup. Not elegant but it would work.

And so, on Sunday afternoon, just before the sun set, baby Kenig entered the Covenant of Avraham Avinu. He was surrounded by a mixed group of patients and visitors. Named Ariel (a name for Jerusalem used by boys and girls here) His Dad said sheheyanu. The Sephardim made the trilling sound of celebration. The Hassidim burst into song and dance.

Devora retired with the baby into the Hadassah Offices to nurse little Ariel.

Avi’s mother happens to own the best paper goods shop in Jerusalem and she had already picked out fabulous “It’s a Boy” trimmings. “Never mind,” said Devora Kenig. “We’ll use it all for the pidgin haben. For that, we’ll have a little more time to prepare.”