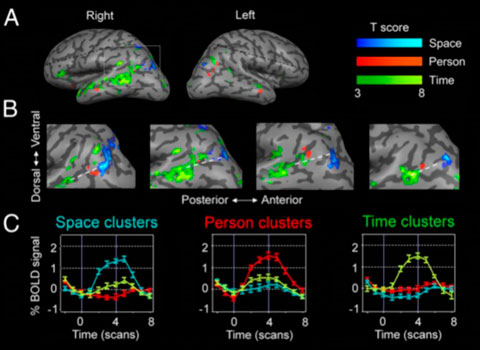 One morning, Barbara Sofer, Deputy Director of the Hadassah Office in Israel, was walking through the atrium of the Hadassah Medical Center’s Sarah Wetsman Davidson Hospital Tower when she spotted Prof. Shahar Arzy, Senior Neurologist and Director of the Computational Neuropsychiatry Laboratory, having coffee with his colleagues.

“Often, I approach our Hadassah doctors to get updates on stories,” Mrs. Sofer says, “but this time Prof. Arzy stopped me. “How old are you?” he asked. “Do you speak Hebrew?”

As it turned out, he needed one more Hebrew-speaking person over the age of 55 to participate in a clinical trial that was testing a method to predict the onset of Alzheimer’s disease.

“How could I refuse?” Mrs. Sofer says. “I ordered my coffee, sat down, and began answering questions posed by one of the young researchers, who had previously served in a cyber intelligence unit of the Israel Defense Forces (IDF). Prof. Arzy had recruited a number of these computer experts to transition from uncovering enemy secrets to helping him uncover secrets of the human brain.”

There is currently no cure for Alzheimer’s disease, the most common form of dementia, which affects one in three seniors. Once the neurons in the brain begin deteriorating, the process cannot be stopped. Most people come to see a doctor when they think they may be getting disoriented. The ideal scenario would be to be able to diagnose the disease before that.

According to research published in Alzheimer’s Research and Therapy, 75 percent of people age 65 and older in the United States say they would be willing to take a test that revealed whether they were going to develop Alzheimer’s disease. Until now, there has been no non-invasive and inexpensive test available. Prof. Arzy and his Hadassah team, however, are developing one.

Based on a personalized, mental orientation test, the technique evaluates the relationship between the participants and the events, places, and people in their personal mental world. When participants are asked which of two events, places or people is closer to them, functional magnetic resonance imaging (fMRI) shows the core brain system at work to retrieve the data.

The first step in Mrs. Sofer’s participation was for the researcher to create a personalized test for her. To do that, he needed to ask her a few questions: Does she know her Israel geography well enough to be able to say whether Tel Aviv or Haifa is closer to Jerusalem? Would she know if Yitzhak Shamir was Prime Minister before or after Ehud Barak? What are her children’s names, the  names of work colleagues, and the name of her dentist?

“The personalizing of this test is one of its unique aspects and contributes to its diagnostic success,” explains Mrs. Sofer. If a person is losing his or her mental orientation in space, time or relationships, that is a sign of the onset of Alzheimer’s disease.

Once her personalized test was ready, Mrs. Sofer received a phone call inviting her to come to Hadassah’s Neuropsychiatry Laboratory. She was told to wear comfortable clothes and to be sure she had recently washed her hair.

Once in the laboratory, Mrs. Sofer found herself having “goo” and electrodes put into her hair. “The test was computerized, with lots of questions that you have to answer very quickly,” Mrs. Sofer recalls. “Most were easy for me, but a few were tough.” For example, one asked if she felt closer to her Hadassah colleagues than certain family members.

“My examiner says I did very well, but maybe he says that to all the test-taking grandmas,” Mrs. Sofer relates. “I’ll never know,” she adds, “because the results go into the data for the clinical trial. It’s my contribution to science.”

The bottom line, Mrs. Sofer notes, is that diagnosing Alzheimer’s disease remains a global challenge. “Early diagnosis is critical,” she says. “It may be the elusive key to beginning effective treatment before it is too late.” Prof. Arzy’s innovative approach has been able to detect that the onset of Alzheimer’s is on its way, with over 90 percent accuracy. Read more about Prof. Arzy and his cutting-edge diagnostic tool.