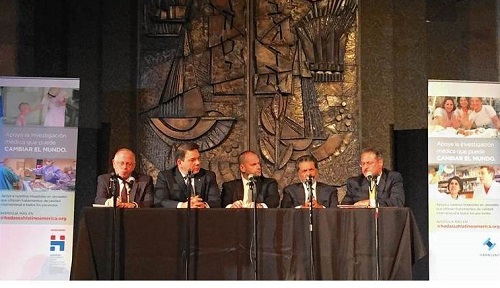 Jewish and Christian leaders recently got together to talk peace and relationships between both communities.

Hadassah international and Hadassah, the Women’s Zionist Organization of America, along with the Consulate General of Israel to Florida and Puerto Rico and the Women’s International Zionist Organization(WIZO), presented this Spanish-speaking interfaith program in honor of Hispanic Heritage Month, “Christian-Jewish Dialogue: Making the World Better Together,” at Beth Torah Benny Rok Campus in North Miami Beach.

Gabriel Baredes, director of Hispanic Affairs for the Consulate General of Israel to Florida and Puerto Rico, said: “For us, this is the beginning of a huge future showing that together through the culture and friendship, we can make a better future with peace and friendship and pull the communities together.”

Baredes praised the program, including a panel discussion between rabbis and pastors and a special Ladino concert at the end of the program featuring Israeli performers Dan Nadel and Lianne Aharony.

Revital Malca, the deputy consul general of Israel to Florida and Puerto Rico, said regarding one of program’s the main purposes: “We want to reach out to the public and get both communities – Christians and Jews – more familiar with one another.”

When asked what he hoped the audience could take away from the presentation, Ibarra replied, “That peace is possible.”

“That’s my experience and that’s what I have to testify,” Ibarra said. “You hear a lot about the [Middle East] conflict, but not a lot about this somewhat rare oasis of peace and co-existence of people.”

“There are things that are happening that many people don’t know because they don’t get into the main news on what’s going on in Israel and what’s going on in Israel is exactly what’s happening inside Hadassah where you have doctors who are Jewish and Christian and Arab and Muslim and they are taking care of everybody who’s coming to the hospital,” Diener noted. “That’s a story that’s not told and we want people to know that.”

The event also featured a presentation by Susan Michael, USA director for the International Christian Embassy Jerusalem, who thanked the State of Israel’s existence for Jews and Christians coming together that evening.

“I was extremely honored to be among such an incredible group of people,” Ortiz said. “These guys are like the crema del la crème (cream of the crop) in the community in terms of pro-Israel sentiments and the main purpose was to just talk among cultures in how we as Christians and Jews can get together and not only just do events together, but overall grow with each other, put the past behind us and move forward.”

Also see an article about this event on the Breaking Israel News ( BIN) website. https://www.breakingisraelnews.com/52966/israeli-diplomats-attend-florida-christian-jewish-dialogue-biblical-zionism/#9y8yEq7jJBVPm0u2.97