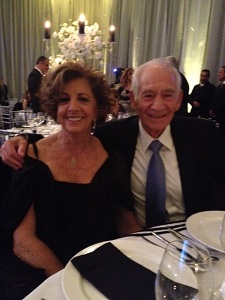 Clarise Dabah of Mexico City, Mexico joined with over 2,000 women and men from around the world to celebrate Hadassah’s Centennial anniversary in Jerusalem. The president of Hadassah Mexico “…was most excited to be here at Hadassah’s 100th anniversary; I have waited a year to be able to celebrate this momentous occasion.”

Dabah hails from a Jewish community comprised of approximately 40,000 people. Much of the community resides in the capital city and its suburbs in the State of Mexico, and the cities of Guadalajara, Monterrey, and Tijuana also host Jewish life. This growing community has maintained a high profile in modern Mexico, and its institutions combine traditional Jewish ways of life with forward-looking perspective.

Dabah began her involvement with Hadassah over eight years ago when a physician from Hadassah Hospital visited Mexico to discuss breakthroughs in the areas of cancer research and surgery. She was incredibly moved by what this doctor had to say.

“For me it was very personal and emotional. My close friend was diagnosed with cancer and I remember thinking how much Hadassah had to offer me.”

Clarise and her husband, Isaac Dabah, recently celebrated their golden wedding anniversary. In lieu of gifts, they requested that their close friends and colleagues contribute donations on their behalf to the Hadassah Medical Center.

“I have been to the United States, Europe, and other places, and in my opinion the level of medical treatment in Israel is the best in the world,” Dabah said.

For Dabah, this convention has renewed her enthusiasm and commitment to Hadassah. “We need to fundraise more and work harder to send gifts to Hadassah for her next 100 years.”