Database at Hadassah Unlocks the Door to Disease Detection 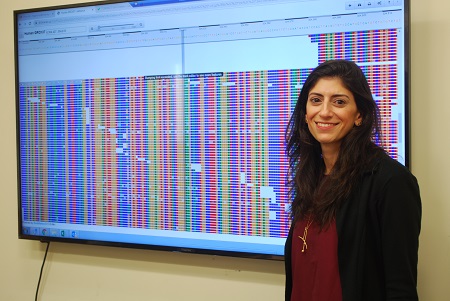 We are accustomed to having blood tests when we go to the hospital, but soon patients at the Hadassah Medical Center will be asked to give DNA samples, too. Having already identified more than 100 new disease-associated genes, researchers at Hadassah will use these new contributions to enlarge the hospital’s HADASSOME exome database. With 5,000 records, it’s the largest database of genetic variants in Israel.

Head of Bioinformatics Hagar Mor-Shaked, PhD, hurries each morning from her home in Ein Kerem village to her computer screen in the Genomic Sequencing Laboratory at Hadassah Hospital Ein Kerem to solve genetic mysteries that can unlock the causes of diseases. Most of her work involves the art of exome sequencing, reviewing the patient’s approximately 180,000 exons containing the most important DNA.

Her team predominantly researches so-called monogenic diseases, those controlled by a single gene, such as cystic fibrosis, Tay-Sachs disease, and Smith-Lemli-Opitz syndrome. However, the Hadassah team also identifies rare diseases that have never been named.

In October 2019, Hadassah marked the publication of its 100th paper on new disease-associated genes. Its geneticists are about to announce an additional 10 such genes in the coming months.

Contributing to Hadassah’s success is the unique composition of Israel’s gene pool. Many cousins marry each other, and extended families are large. As a result, they often have multiple presentations of syndromes. The combination of traditional families and advanced medicine makes Hadassah ideally positioned to solve genetic mysteries.

“A child arrives at a clinic, and the doctor either doesn’t know what the problem is or doesn’t have a name for the disease,” relates Dr. Mor-Shaked. “The doctor then sends a DNA sample for exome sequencing, and the geneticists try to find out what’s gone wrong.”

One typical case is that of a local family in which the cousins have married. Their oldest son, age 22, is healthy. The next five children, however, died within their first year of life. Before the last child died, DNA was preserved.

In October 2019, the parents came to Hadassah with their sad history and the news that the mother was pregnant again. Hadassah geneticists were able to identify a homozygous mutation in the BRAT1 gene, which is responsible for a disease called lethal neonatal rigidity and multifocal seizure syndrome. They then tested the embryo of the pregnant mom and found that though her child would be a carrier, the child would not have the disease. Encouraged that they will have a second healthy child, the couple decided to go ahead with the pregnancy.

Dr. Mor-Shaked sees a deep psychological value in being able to identify a disease. “It’s not enough to sensitively inform a couple that their child is going to be blind, deaf, and autistic,” she explains. “Parents need to know why. Once the disease is discovered and named, some afflicted families create charitable organizations to help other families who are dealing with the same disease.”

Using HADASSOME, geneticists can compare the exomes of a family they are treating now with the exomes of people of a similar ethnic background. If the case under investigation does not match existing records, then doctors know they are dealing with a new variant. That variant is added to the database.

The world’s largest publicly available exome database is the genome aggregation database (gnomAD) at the Broad Institute in the United States. It contains exomes of many Ashkenazi Jews, but it lacks the exomes from people of Middle Eastern origin that Hadassah’s database has. Hospitals around the world are already contacting Hadassah about the data in HADASSOME.

Exomes don’t change. That means as new diseases are discovered, Hadassah can contact previous patients and offer them solutions that were not available before.

In the last few months, Hadassah has purchased a NovaSeq 6000 Sequencing System, the most advanced “high-throughput” sequencer, where large amounts of data are gathered quickly. This has enabled Hadassah to begin performing DNA sequencing in-house rather than outsourcing it and has led to a sharp increase in exome analysis.

As the HADASSOME cohort grows, Hadassah laboratories will begin examining the genetics of more complex diseases, reactions to drugs, and why some patients can safely undergo general anesthesia while others cannot.

This is all part of Hadassah’s move toward personalized medicine. “Most of the time, I’m behind the scenes,” says Dr. Mor-Shaked, a mother of two small children. “Emotionally, it’s a bit easier for me because I don’t take the sad faces home with me, though learning about that family that had to bury five babies makes me even more determined to locate the cause. There’s also the fear of making a mistake. The responsibility is immense. It’s a puzzle, but when you find the solutions, you can change lives for the better.”