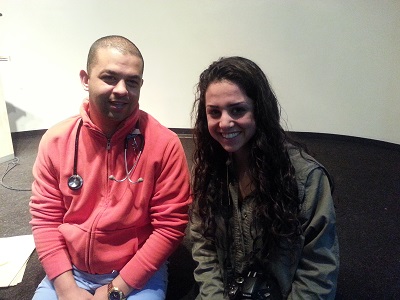 “We have seen and heard so much about the Mideast conflict, that it’s a relief to see a place which is an island of peace,” said a member of the David Project delegation, which visited the Hadassah Medical Center on January 2nd.

The David Project is a Boston-based Israel advocacy organization, which educates campus activists from around North America. A key element of its educational program is the “Israel Uncovered” mission, which takes students to Israel to learn about the country firsthand. Past National Hadassah President Nancy Falchuk sits on the David Project board and ensured that a visit to Hadassah was on the delegates’ itinerary.

“One bus of the students, representing diverse ethnic backgrounds, arrived at Hadassah in the morning and the second, in the afternoon. Both groups toured the Sarah Weisman Davidson Hospital Tower and the Chagall Windows. The morning group visited the Charlotte R. Bloomberg Mother and Child Center, where the students witnessed the full array of ethnic groups among the pediatric patients. The afternoon group visited the Judy and Sidney Swartz Center for Emergency Medicine, where adults of all different ethnic groups were being treated. The morning group met Dr. Amjad Faran, a Jordanian/Palestinian resident in anesthesiology, who shared his experience as a Palestinian working in Hadassah Hospital. He told the delegates that his residency is the envy of Palestinian colleagues who are studying in other countries. “They are in good programs,” he said, “but I get to do far more than they do and have superior training.”

Dr. Faran added: “There’s also an emphasis on research, even for residents, so that this will become an important part of my medical career.” Responding to the students’ questions, Dr. Faran said he had never had difficulty with patients rejecting him because he is a Palestinian, and that he is a totally integrated member of the department. Dr. Faran lives in Ramallah with his wife and child, and his only complaint is the extra time it takes him to get home.

The afternoon student group met 25-year-old Dvir Moussai, who hails from near Hebron. Mr. Moussai was injured in a terror attack when he was a teenager and treated at Hadassah. He is now a volunteer at the hospital.

Mr. Moussai explained to the students that he had over 30 operations at Hadassah to correct the damage caused by stepping on a landmine while on a cherry-picking class trip. “At the beginning, it was hard for me to share a room with Arabs or to be treated by them,” he said. “But just being in Hadassah changed the way I feel. Now I’m comfortable with everyone.”

Many of the students commented that the trip to Hadassah was reassuring. One student noted that it was “an eye opener.” Pauline Marcucci of Temple University in Philadelphia said: “I want to thank you for taking the time to show us through your beautiful and inspiring hospital, where it is very exciting to see Israel work progressively towards peace and togetherness.”