Despite Corona, Hadassah Convoy’s Fallen Are Not Forgotten 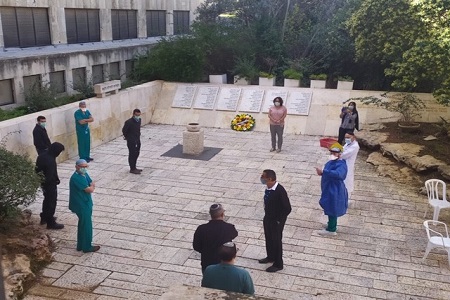 Hadassah Medical Organization staff, Israeli dignitaries, and the families of those murdered were scheduled to gather Sunday, the fourth day of the Hebrew month of Nissan, to commemorate the 72nd anniversary of the most tragic event in our hospital’s history— the massacre of the Hadassah Mount Scopus medical convoy on April 13 (Nissan 4), 1948. While the coronavirus epidemic prevented the formal ceremony, the Hadassah family will never forget, and paused to honor the memory of the 78 doctors, nurses, students, patients, faculty members, and soldiers who were murdered.

With an Arab blockade in place ahead of the impending declaration of the State of Israel, the only route to and from Hadassah’s Mount Scopus campus was via a narrow road through the hostile Arab neighborhood of Sheikh Jarrah.

s, and armored vehicles—set off from downtown Jerusalem on their way to the hospital

As they turned toward Mount Scopus, oddly, the corner store was closed. Suddenly, at 9:45 am, a mine was detonated in front of the lead vehicle. Dozens of Arab fighters opened fire. At 2:00 pm, the buses were set ablaze with Molotov cocktails.

The nearby British forces only attempted a rescue mission at 4:00 pm.

Among the dead were hospital director Dr. Chaim Yassky and the incoming head of the medical school Dr. Moshe Ben-David.

Most of the bodies were burned beyond recognition. Many were buried in a mass grave.

Teaching at the hospital that day, nurse Judith Steiner-Freud, now 100 years old, heard the noise of the massacre but insisted on continuing to teach her students.

“I knew war was coming, and every Hadassah nurse would be needed,” she said.

A telegram was sent to the New York office of Hadassah, the Women’s Zionist Organization of America. The sad decision was made that Hadassah Mount Scopus would be closed, and the hospital was

transferred to buildings in the center of Jerusalem.

When the city of Jerusalem was divided at the end of the War of Independence, the hospital remained in a finger of Israeli territory within Jordanian territory. After Jerusalem was reunited in the Six-Day War in 1967, Jerusalem Mayor Teddy Kollek phoned National President of Hadassah Charlotte Jacobson. “Charlotte, I have your keys,” he said. “What do you want to do with your hospital?”

Jacobson flew to Israel and inspected the building, which had suffered two decades of neglect and damage. She returned to the National Board with Kollek’s question. Although Hadassah Hospital Ein Kerem had been opened in 1962, the decision to return to Mount Scopus was unanimous.

A successful fundraising campaign was launched, and, in 1976, the campus reopened, featuring a rehabilitation center, a neonatal unit, and a hospice.

Today, the hospital is a thriving part of the Hadassah Medical Organization. Construction is underway on a new and vastly expanded rehabilitation center, which will bring much-needed therapy to soldiers and civilians. One thousand patients have already been treated in a new cardiac catheterization unit. More and more babies are being born in the new maternity center.

“The heart of Hadassah has been beating here on Mount Scopus for almost 90 years,” said Hadassah Mount Scopus Director Dr. Tamar Elram. “We will never forget those who died on their way here to have babies, receive medical care, and heal the sick. We honor their memories and send our condolences to those who lost their loved ones. Hadassah and Jerusalem mourn and honor all of those who were killed in the Hadassah convoy.”