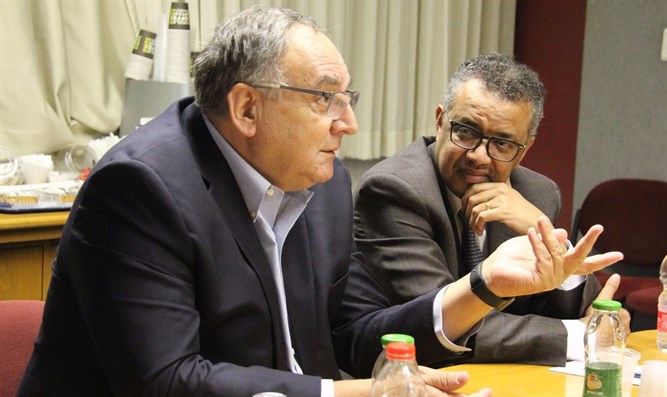 During a surprise visit to the Hadassah Hospital at Ein Kerem, World Health Organization Director-General Dr. Tedros Adhanom Ghebreyesus stated that “Hadassah is proof that medical treatment creates a bridge between people, and is a center of hope.”

As a preeminent medical institution in the Middle East, Hadassah Hospital hosts visits by prominent people from international organizations and countries around the world like Dr. Ghebreyesus, who expressed his amazement at “the staff’s impressive devotion to the patients, as well as the continuous thought that goes into treatment at Hadassah.”

During this, his first visit to Israel, Dr Tedros discussed WHO’s plan to establish an office in Tel Aviv later this year with the aim of strengthening the partnership between Israel and WHO, and Israel’s contribution to the work of WHO’s European region. He recognized the progress made in the Israeli health system, and called for health to be used as a “bridge for peace”.

An Ethiopian political, academic, and public health expert, Dr. Ghebreyesusis is a well-known researcher on malaria and served as Minister of Health for the Government of Ethiopia from 2005 to 2012. During his tenure he improved access to health services and hired 40,000 female health workers, helping to reduce the infant mortality rate in the country.

And an article on Hadassah United Kingdom website https://www.hadassahuk.org/who-director-general-visits-hadassah-calls-for-health-to-be-used-as-a-bridge-for-peace/