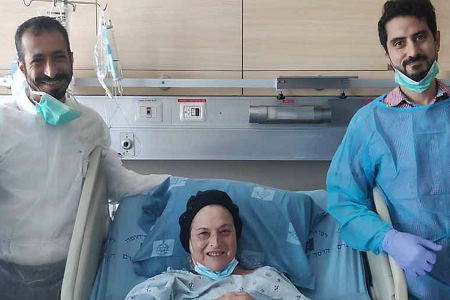 Translated and excerpted from the August 25 issue of Kol Hair

Deborah Cramer was scheduled to undergo an urgent kidney transplant. A kidney donor had been identified, and the kidney proved to be a match, but Deborah’s complex blood vessel problems prevented Hadassah Hospital Ein Kerem’s transplant surgeon from proceeding.

Hadassah’s surgical team, however, found a solution: a double donation—blood vessels from someone who had died and a kidney from a living donor. Because Deborah, age 58, suffered from vascular disease, the medical team needed donor blood vessels to connect the new kidney to her body.

“At age 25, when I was pregnant for the first time,” Deborah explains, “I suffered from severe preeclampsia. Sadly, my daughter was born prematurely and did not survive. I was told a further pregnancy could damage my kidneys.”

When Deborah became pregnant again, her baby was born in the sixth month, also following preeclampsia. “They tried really hard to save my kidneys,” Deborah relates, “but it didn’t work. I had to begin dialysis treatment.”

At age 28, Deborah had her first kidney transplant, and the kidney lasted 18 years. After being on dialysis once again for a while, she traveled to China for a second transplant. That kidney lasted 10 years. Deborah began dialysis once more and registered with Matnat Chaim, an Israeli organization that encourages and facilitates kidney donations. “I waited with bated breath,” Deborah says. “My daughter-in-law’s mom wanted to donate a kidney to me, but we weren’t a match. However, a really good friend of hers, a wonderful woman named Shoshana Tal, was interested in donating, and I was delighted to hear that we were an excellent match.”

Deborah and Shoshana began the emotion-laden transplant process, but it was delayed by the COVID-19 pandemic. In the meantime, Deborah’s condition deteriorated.

“When the hospitals returned to a regular footing, we were able to go ahead with plans for the transplant,” Deborah reports. “Then the problem with my blood vessels came up. On the one hand, there was a kidney donor with a big heart; on the other, the doctors couldn’t operate because I was missing functioning blood vessels. It was so frustrating.”

Dr. Abed Khalaileh, senior transplant surgeon at Hadassah, explains that “Deborah suffers from advanced atherosclerosis, and performing a transplant in such a situation involves high risks to the point of losing the transplanted kidney. Because Deborah had already undergone two transplants, this procedure was more complicated. We had to carefully map out the operation. Though there is an option to transplant synthetic blood vessels, the risks are high for infection and blockage of the blood vessels, so we planned the transplantation using blood vessels from the dead donor.”

Dr. Khalaileh emphasizes that the donation of blood vessels from a dead body for use in a kidney transplant from a living donor is rare. “We had to make sure there was a three-way match.”

Deborah concludes with a smile, “Apparently, I won’t be able to undergo another kidney transplant, but the medical team did all it could to ensure that I received the kidney in a way that was the very best for me. The anesthesiologist and doctors explained everything at every stage in a calm and pleasant manner. The way they dealt with me in intensive care after the surgery was incredible. The same goes for all the staff in the transplant department. The rooms are great and my husband had the option to be with me, which is a really important part of the process. It was miraculous. I have grandchildren to marry off, and I believe this kidney will allow me to live to see them on those important days.”