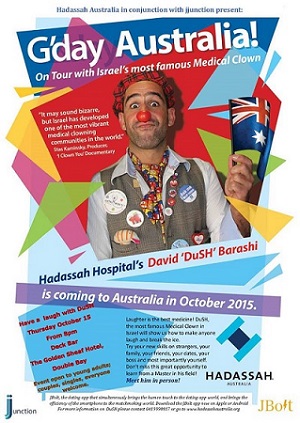 He travelled to Perth, Melbourne and Sydney, talking to Hadassah International supporters at numerous events. He gave laughter workshops, spoke at schools and synagogues, and trained medical staff about the role of Medical Clowns.

DuSH ran the most amazing workshop with The Humour Foundation (the Australian Medical Clowns). He was then privileged to work with them at the Royal Childrens’ hospital in Melbourne. He also ran a workshop for the staff at Medibank – a private health insurance funder – which was well received.

In Sydney, he attended a JNF Gala and baked Challah with children and their mothers.

Dush spent much of his time working with children. He gave workshops and explained the role of medical clowns in alleviating the fear of pediatric patients to students of all ages in Jewish Day schools.

This year Hadassah is celebrating the Bar Mitzvah (13th year) since the start of the Medical Clown Program. Australian Children in Jewish Day Schools, as part of their education about the need to give Tzadakah, are being offered the opportunity to simply make a gift or to share their Bar/Bat Mitzvah and to donate a portion of the gifts they receive to help the sick children at the Hadassah Hospitals who will benefit from the extraordinary work of the Medical clowns. The children in one Kindergarten class are donating their birthday money to the Medical Clown project!

He also did a workshop with 20 Moriah College Bat Mitzvah girls and their mums, thanks to the Ms. Ethy Levy, Trade Commissioner, Embassy of Israel

Hadassah Australia has taken on the Hadassah Medical Clown Program as its major fundraising project for the year.

DuSh’s visit in the media:

The Australian- Clowning around brings the right dose of medicine