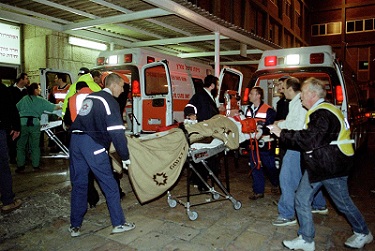 On February 22, 2004, Amos Levy was critically injured during a suicide attack on the #14 Jerusalem bus. Amos, 28 years old at the time, was a newly qualified lawyer on his way to a new job. Now over 10 years later, he says: “At this point, I, of course, don’t remember anything that happened, but I know it is thanks to extremely talented doctors that I am alive.”

When Amos’ bus exploded in flames, the bomb ripped through his body. The shrapnel pierced deeply into his skin, shredding the major arteries in his legs. Suffering from extreme blood loss, Amos arrived at Hadassah Hospital-Ein Kerem very close to death.

Amos was rushed into surgery, where Hadassah’s trauma team battled to save his life. Although he survived surgery, it took another 48 hours and multiple resuscitations to get him stable. “I am alive due to a combination of heroism, extreme medical talent, lots of luck, and the best of the best medical care,” says Amos.

He adds: “Sadly, one of the greatest reasons I’m alive is also the medical staff’s experience with trauma victims. I was injured in 2004, in one of the last suicide bombs of the intifada. The doctors already had years of experience with these type of injuries. If I had been injured in the beginning of the intifada, I doubt I would be alive today.”

Amos underwent several more surgeries and spent an additional 10 days in intensive care before being transferred to the surgery ward. After one month in Hadassah-Ein Kerem, he was transferred to Hadassah-Mount Scopus for rehabilitation. “I was so determined to go home,” he recalls, “that I passed all my rehabilitation tests within four days!”

Over the next few months, Amos was in and out of the hospital undergoing more surgeries, and between surgeries doing intensive physical and occupational therapy. “I felt I had a partner in the staff at Hadassah,” he notes; “they held my hand from the moment I was wheeled through their doors, and they still have not let go.”

Just seven months after being critically injured, Amos managed to travel abroad with his wife. Eight months later, he was back at work. His first son was born one and a half years after the attack, and has been followed by three other siblings. Amos regularly sends emails with pictures of his children to the doctors who saved his life because, he says, “without their life-saving work, my children would not have been born.”

If you met Amos on the street today, you would never guess that there were scars under his clothes. His long pants cover the pressure bandages he wears on his legs to regulate his circulation. While he still comes to Hadassah for check-ups, he hasn’t been hospitalized in over eight years.

“Centimeter by centimeter, minute by minute, I got back to life,” he says. “Without the support of my wife and without Hadassah Hospital, it wouldn’t have been possible.”