Family Memorializes a Child Through a Nursing Scholarship 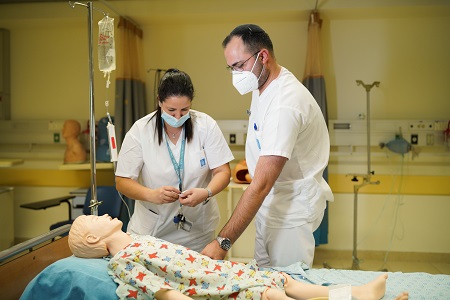 Many of the merit scholarships at the Henrietta Szold Hadassah-Hebrew University School of Nursing are awarded in memory of parents or mentors who were exemplary nurses. The scholarship that was endowed by the Essa family is a little different because it memorializes a sister who died at the age of 10.

Tony Essa, a young nurse in Hadassah’s Neurology Department and a lecturer in clinical nursing, wanted to empower a new generation of nurses in memory of his sister Janan. Together with his parents, Souhail and Nahida, Tony created the annual Janan Essa scholarship for two outstanding students—one Arab and one Jewish.

The Essa family is from Eilabun, a village west of Tiberias, but they lived for years in the US, mostly in North Carolina. “From the time she was 4 years old, my sister Janan kept asking my parents for a baby brother,” recalls Tony. “After Janan died, my parents found a picture she’d drawn of herself as an angel accompanied by two small boys. A year later, my mother gave birth to twins, my brother Jony and me, named for Saint Anthony.”

Tony adds, “My parents imbued us with a sense of giving. It’s a part of who we are. We want Hadassah nurses to continue the tradition of excellence into the future.”