The Search for a Miracle Cure for MS 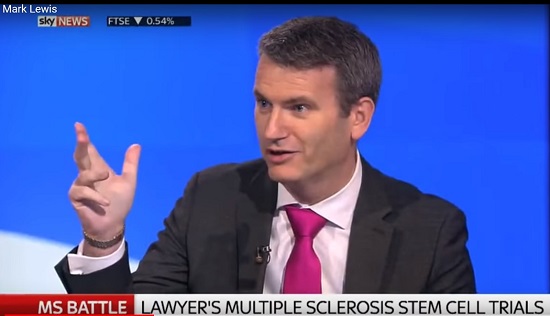 He thinks it is a miracle! For the first time in many years, Celebrity British lawyer Mark Lewis can use his right arm and hand again, walk unaided, and speak more clearly. After years in a wheel chair, he experienced a remarkable reversal of his Multiple Sclerosis symptoms within two hours of participating in a medical trial at Hadassah using Stem Cells to treat MS.

This past week Mark Lewis has been proudly sharing his miraculous improvement with the British media. He has been interviewed by the BBC, Sky News, several leading UK newspapers, and has starred in a documentary on Channel 4.

Joining MS sufferers from around the world, in 2016 Lewis became Patient 31 of 48 in a ground-breaking clinical trial that could offer a cure for MS – as well as providing a major breakthrough in treatments for Parkinson’s and Alzheimer’s.

Conducted at Hadassah University Medical Center in Jerusalem, the trial is being supervised by Hadassah Medical Organization Senior Neurologist Prof. Dimitrios Karussis. It involves injecting stem cells derived from the patient’s own bone marrow directly into the spinal fluid – a method it is hoped will encourage cells to circulate around the body to the brain and spinal cord, from where they will pick up signals of damaged areas and set to work fixing them.