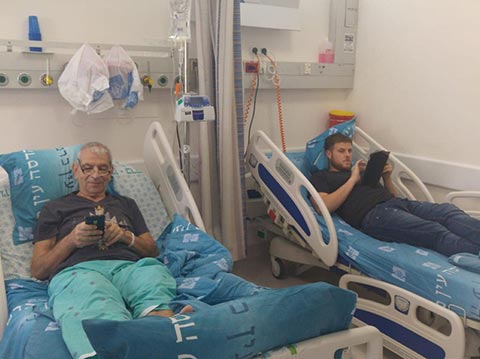 Avi Yavetz, 60, from the city of Modi’in, suffers from peripheral vascular disease (PVD), a blood circulation disorder that causes the blood vessels outside the heart to narrow and become blocked. As the disease progressed, the blood vessels in Yavetz’s legs became blocked. He underwent many procedures to try to restore blood flow to the leg. All were unsuccessful. The obstructions in his legs’ blood vessels got so bad that amputation was almost a certainty, a common occurrence in PVD patients.

But in this case, Yavetz had an artery and veins inside the leg that could restore blood flow. What was missing was a vein large enough to connect the artery and the smaller veins in the leg. Because of his previous surgeries, none of Yavetz’s veins was in good enough condition to attach and restore blood to his leg. “I had this crazy idea to check if someone in his family would be willing to donate a vein and thus save his leg,” said Prof. Ron Carmeli, Director of the Department of Vascular Surgery at Hadassah. “Even though all four of his children offered their veins, his son, 27-year-old Snir, had the best vein for our needs.”

Prof. Carmeli removed a long vein extending from Snir’s groin to his foot. The vein was quickly brought to a separate operating room in the Sarah Wetsman Davidson Hospital Tower at Hadassah Ein Kerem, where Yavetz had been prepared for the implantation.

“In world literature there are descriptions of vein transplants removed and donated from corpses,” said Prof. Carmeli.

“Success over the years has been limited, so most hospitals stopped the use of venous transplants. But transplantation of a vein received as a donation from a living person—and another family member in our case—is the first of its kind.”

Two weeks after the operations, Yavetz and his son Snir are doing well. “I am pleased to report that the vein is functioning and the leg is safe from amputation,” said Prof. Carmeli. “The treatment of this patient is the same as every transplant patient, just like someone who has undergone liver and kidney transplantation, and includes treatment with preventive drugs to prevent the rejection of a new organ and close monitoring of the intake and function of the vein.

The operation was carried out with the cooperation of medical teams of the departments of Vascular Surgery, Anesthesiology, and Intensive Care at Hadassah. I am sure this breakthrough will save many others in the future.”

Said Yavetz, “Today the blood flows in my leg properly. My son and the vascular department at Hadassah saved my leg. Not just my son but the Hadassah doctors and nurses feel like family. It’s an amazing team! Thank you, Hadassah!”