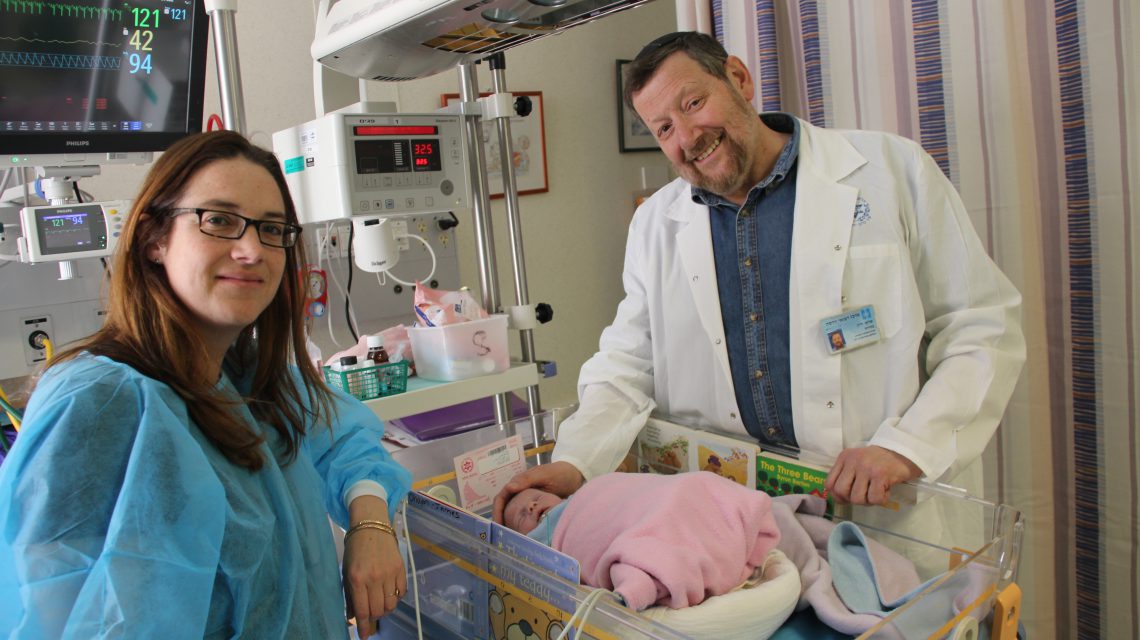 Former Chair of Hadassah International Helaine Ohayon has been a devoted supporter of the Hadassah Medical Center for many a year.

Early in her nursing career, she worked in the well-baby clinics founded by Hadassah. But only recently did she experience firsthand the cutting-edge expertise and warm devotion of its pediatric heart specialists and nurses when they teamed up to save her infant granddaughter’s life.

When Helaine’s daughter, Elise, was pregnant with her third child, a routine ultrasound revealed that  there was something seriously wrong with its heart. Elise was living in Tel Aviv at the time and was referred to Prof. Azaria Rein, head of Pediatric Cardiology at Hadassah.

Elise immediately phoned Helaine, also a long-time Board Member of Hadassah in America. “I was upset,” Helaine recalls, “but at the same time I knew Elise was in the best place in the world.  I even knew Prof. Rein personally. We’d run a presentation together in Geneva.”

Despite the seriousness of the baby’s cluster of abnormalities, Prof. Rein was able to reassure Elise and Helaine that he could help. He explained: “We could see that the baby has what is called transposition of the great arteries. This means that her aorta is connected to the right ventricle, and the pulmonary artery is connected to the left ventricle–the opposite of a normal heart’s anatomy. In addition, the baby has a large hole between her two ventricles. With these arteries reversed, oxygen-poor (blue) blood returns to the right atrium from the body, passes into the right ventricle, and then goes into the aorta and back to the body. Oxygen-rich (red) blood returns to the left atrium from the lungs and passes into the left ventricle, which pumps it back to the lungs–the opposite of the way blood normally circulates.”

Prof. Rein further explained that “if not diagnosed, this condition is potentially fatal, but if it is diagnosed before birth and treated immediately after birth, we have excellent results with surgery.”  He noted that he and his team would continue to monitor the baby and reassured them that “the baby’s heart itself looked good.”

In addition to the prenatal heart check-ups, Elise went forward with the routine ultrasounds that most pregnant women undergo in Israel. This includes a detailed anatomy scan. The doctor checks the baby’s heart rate and looks for abnormalities in her brain, heart, kidneys, and liver. Fingers and toes are counted, there’s a check for birth defects, an examination of the placenta, and a measurement of the amniotic fluid.

“The doctor got very intense and serious,” Elise recalls. “She said there was no sign of a liver and kidney portal system (veins that transport the blood).” This was a very serious condition, she told Elise, and suspected that the pregnancy would have to be terminated. Elise had come to terms with the baby’s heart problems, but, she says, “I was sick at the thought of aborting my 23-week-old baby.”

Once again, she found herself driving furiously to Hadassah Hospital. This time, she met with Prof. Simcha Yagel, head of Hadassah’s Division of Obstetrics and Gynecology and an internationally renowned expert, who had developed a method of performing prenatal ultrasounds. Prof. Yagel, while confirming the heart problem, reassured her that all the baby’s other systems were just fine. “I almost collapsed from relief,” Elise says.

“No surgery is routine,” Dr. Erez emphasizes. “Often there are surprises.” As he explains, “the transposition of Emmanuelle’s great arteries was just part of the problem. In addition, this baby’s pulmonary artery passed behind the trachea instead of in front of it. She also was missing a pulmonary valve, a condition called pulmonary atresia. The valve had failed to develop, obstructing the outflow of blood from the lungs to the heart. Such a cluster of heart problems is rare. A major center like Hadassah sees maybe one case of this each year.”

Dr. Erez performed what is called “an arterial switch,” changing the blood flow to that of a normal heart. Emmanuelle–her name in Hebrew means G-d is with us–was scheduled for additional corrective surgery in a few months.

As the baby recovered in Hadassah’s Pediatric Intensive Care Unit, Elise noted that the doctors and nurses were “not only professional, but they were warm and wise. Such a great team!”

When Emmanuelle came home from the hospital, however, one of her siblings had a cold. Soon Emmanuelle was back in the hospital, suffering from plummeting oxygen levels and labored breathing. Because the baby’s cartilage in her windpipe had not developed properly, Dr. Erez explains, he now needed to move up her second surgery.

That surgery, too, proved successful and Emmanuelle was truly on the road to recovery. “I always felt proud of Hadassah,” Helaine relates, “but now that I have gone through this experience with Elise and Emmanuelle, I have a new feeling of love and awe.”

Fast forward a bit and Prof. Rein comes to see Emmanuelle. Leaning over to give her a peck on the cheek, he says: “She’s perfect. Her prognosis is that she will be at least a great grandmother!”