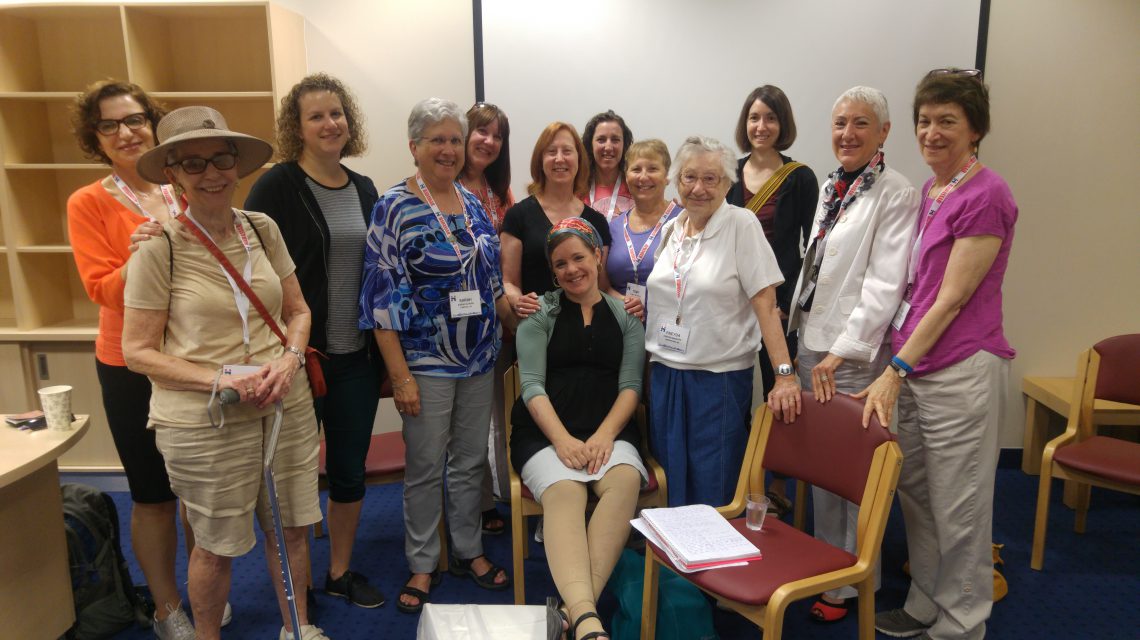 “My mother held my hand throughout the painful and hard-to-watch treatment that I received for my burns,” related Inbar Azrak, former terror victim, as she spoke with the participants on Hadassah’s Mother and Daughter Mission. “My mother gave me strength, but may we never need that kind of strength.”

Ms. Azrak is still recovering from the terror attack, which wounded her on August 3, 2015. Receiving treatment for her burns, she spent two months at Hadassah Hospital-Ein Kerem in the Sarah Wetsman Davidson Hospital Tower. She returned to Ein Kerem to tell her story to the American mothers and daughters on this mission, led by Hadassah Immediate Past National President Marcie Natan.

On that August day, Inbar and her husband, Oir Azrak, a young sabra couple with three small children, were returning home from a romantic gateway. Short on cash–she’s a teacher and he’s just starting college after a long stint in the Israel Defense Forces–they couldn’t afford a hotel, so they stayed with Inbar’s grandmother in Jerusalem. Inbar’s parents, Hannah and Yaakov, who live in a rural community in the Galilee, were taking care of their children.

On the drive home, near the northern part of Jerusalem, suddenly the window in the passenger’s side shattered, spraying sharp shards of glass all over the seat. A deafening boom was followed by a flash of fire, as a Molotov cocktail exploded in the vehicle.

“Get out, get out,” yelled Ori, who was driving. He was out in seconds. Inbar heard his voice through a daze, realizing she was in a terror attack, but at the same time denying that this could be happening to her. “Get out, Inbar.” She tried, but the seatbelt was stuck. The metal was scorching. Her skirt was on fire. Before Ori could get to it, she managed to press the button and get out.  She rolled on the ground. “I’m alive, I’m alive,” she kept saying to herself;  “I can take the pain.” Ori stamped on the fire, to put it out.

Minutes later, the car, now empty, exploded and rolled backwards. A passerby shouted, “Ma’am, is anyone else in the car?”

“The children!” she thought; no, they were safe at her parents’ home. Had they been in the car, she wouldn’t have been able to rescue them. The thought made her faint.

Someone was holding water to her lips. Then the ambulance, its sirens blaring, was speeding away to Hadassah Hospital-Ein Kerem.

Inbar was familiar with Hadassah, because two of her three children were born there. “I come here to give birth, not to be treated,” she told the paramedics.

First she was taken to the Judy and Sidney Swartz Center for Emergency Medicine, where she received initial treatment. Then she was moved to the seventh floor, Plastic Surgery Department, in the Sarah Wetsman Davidson Hospital Tower, where her body was treated for severe burns.

To prevent infection, Inbar was put in an isolation room. As Dr. Tomer Tzur, a Senior Plastic Surgeon at Hadassah, explains: “Hadassah Hospital staff have a lot of experience treating victims who have been burned during war or terror attacks. “We know we need to control infection and to minimize the area that will need skin grafts.”

“I don’t know whom to thank first among the angels at Hadassah,” said Inbar. “From the moment we arrived at Hadassah-Ein Kerem, we had the most compassionate and most professional care. What a gift to have this beautiful and comfortable room where my family and guests can feel comfortable.”

Inbar is currently pregnant and hopes that the next time she comes to Hadassah, it will be to give birth to a son.