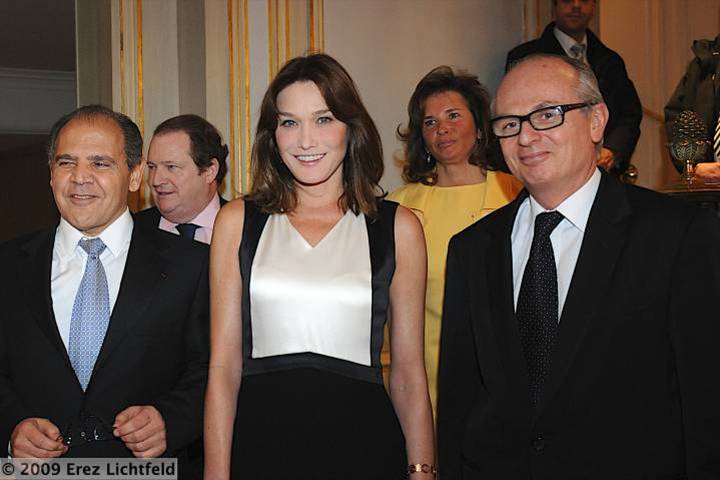 Carla Bruni-Sarkozy is a singer, model, First Lady of France, Good Will Ambassador for the Global Fund to Fight AIDS, Tuberculosis, and Malaria, and a wonderful friend and advocate of the Hadassah Medical Center. On March 5, she was the guest of honor at a gala fundraiser organized by Hadassah France in Paris, helping to raise over $380,000 for Hadassah’s global outreach to orphans with AIDS in Ethiopia.

Mrs. Bruni-Sarkozy forged a bond with Hadassah Hospital when she visited the pediatric hemato-oncology wing last June and promised to do something to help. “I’m so happy to have kept my promise,” she said, in her warm presentation at the dinner. When Mrs. Bruni-Sarkozy visited the children with cancer at Hadassah, she was touched by the young patients and impressed by Hadassah’s facility, where Palestinians and Jewish Israeli children are treated side by side.

“The image of Israel she conveys,” comments Hadassah France President Dr. Sydney Ohana, “can help get rid of the vilifying view of Israel created by the conflict in Gaza.” Emphasizing the importance of arranging visits to the Medical Center, he notes, “People come see what we do and they want to help.”

Mrs. Sarkozy is well-versed on AIDS, having lost a brother to the disease. Through her contact with scientists and her Global Fund network, Dr. Ohana relates, Mrs. Bruni-Sarkozy “can help make sure that Israel’s researchers are not marginalized and that science has no borders.”

Adding to the excitement of the evening was a surprise appearance by Nicolas Sarkozy, President of France, who stopped by on his way to Mexico.

Editor’s Note: The information for the above was excerpted from an article by Devorah Lauter in Paris for the March 6 JTA.  Click here to read the full article.