From Brutality in Belgium to Healing at Hadassah 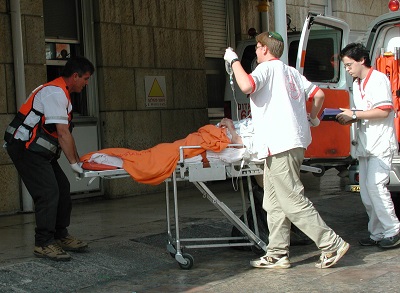 On their way home to Israel from a family wedding celebration in Belgium, Mendy and Chaim, two young Belz Hassidim, became victims of the Belgium airport bombing. Bleeding and seriously injured, they eventually made it on to an ambulance which took them to a hospital in Brussels, but true healing began when they were then taken to Hadassah Hospital-Ein Kerem for intricate surgery and recovery.

“Their injuries are the same as those we have seen so many times after terror attacks here,” relates Prof. Rami Mosheiff, head of Orthopedic Trauma at Hadassah. “We have the most experience in fixing these injuries–building the bone and restoring the limb to full function.”

“I have received requests from other European countries as well,” Prof. Mosheiff reports. “Experts abroad want to hear what we’ve learned at Hadassah.”

The wedding of Aaron and Hava Farkash, the result of an international matchmaking between the Belz Hassidim of Antwerp and Jerusalem, drew a large crowd of family members from Israel to Belgium. Among them were the groom’s brother, Mendy, and his brother-in-law, Chaim.

On March 22, once the post-wedding parties were over, 15 of the Israelis guests went to the airport early in the morning for their flights home. They had arranged to meet up near a coffee shop.  Mendy and Chaim had volunteered to watch the hand luggage so the others could deal with last-minute shopping, tax slips, and bathroom stops. At 8:50 a.m., Mendy and Chaim heard a blast, coming from the direction of the American Airlines check-in section. They ran towards an area near the elevators because a crowd was stampeding to the exits. Forty seconds later, a second blast came–the explosion hitting just where they had been standing moments before.

“They would have been dead if they hadn’t run,” said Tova Farkash, mother of 12. Nevertheless, they were badly injured by the blast. Chaim recalls: “I fell down, but then pulled myself up. I couldn’t feel one leg, but I hopped on the other one to get away. I was afraid there would be a third bomb. Now I was screaming. I went into the elevator, which was full of blood. A man helped me.  At last an ambulance took me.” Chaim had ended up with 11 pieces of shrapnel in his limbs.

Fortunately, Chaim’s seven-year-old daughter, whom they’d originally thought would stay with him and Mendy, had at the last moment gone with his wife to take care of the tax slips.

With the airport closed off, Mrs. Farkash only found her son and son-in-law hours later in the Brussels hospital. Now they are at Hadassah and, according to Prof. Mosheiff, “the prognosis for both patients is good.”