From Hidden Child During the Holocaust to Hadassah Surgeon 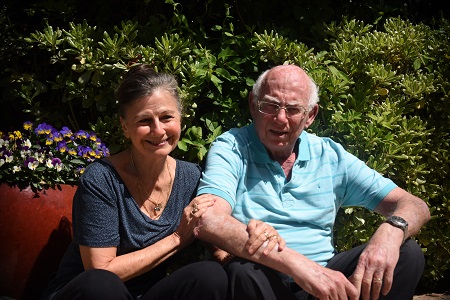 It’s not something he talks about. Indeed, until 2005, no one knew. None of his patients. Not even his wife Raya, nor their four children.

Dr. Shaul Perlberg, age 80, is still practicing urology at Hadassah Hospital Mount Scopus, as he has for many years. But it wasn’t until 16 years ago that he decided to reveal the incredible story of his childhood, the reunion with his mother after the Holocaust, their move to Israel, and the way he met the love of his life, Raya.

Dr. Perlberg was born in Belgium. Before his parents, Tovah and Avraham were rounded up by the Nazis, they persuaded their elderly neighbor Alice Pirotte to pretend that their son was her grandson. Dr. Perlberg’s parents changed his name from Shaul to Paul and taught the two-year-old son never to take off his trousers in front of strangers.

One day, the Gestapo came knocking at Pirotte’s door. Someone had informed on her and her “grandson.” The soldiers decided that the best way to prove the boy’s “guilt” was by forcefully removing his pants. A battle ensued during which the soldier attempted to yank the boy’s pants down while the young Perlberg resisted as much as he could.

Enter Diane, Pirotte’s German shepherd. With “Paul” fighting off the Nazi assault and Diane advancing, baring her teeth, salivating, and growling, the officers fled the scene. Despite returning on other occasions, they never got the better of Diane.

Dr. Perlberg’s father was murdered in Auschwitz. His mother, after recovering from her physical scars in an American hospital after the war, returned to Brussels. Praying that her only child had survived, she entered a children’s home for orphans and heard the giggles of youngsters playing at the top of a staircase. As she made for the steps, not knowing how she would even recognize her child after their lengthy separation, a five-year-old boy headed in her direction and jumped on her, shouting “Maman! Maman!”

Where should they go?

“My uncle, my mother’s brother, had left for Israel in the 1930s,” Dr. Perlberg relates.
“After the war, he urged us to join him. My mother consulted the one person she thought could give sensible advice—a certain little boy by the name of Shaul Perlberg.”

Dr. Perlberg’s mother had explained that the place where they would be going would be very different from what they were used to—in temperature, language, and food. In everything.

“I asked her just one question,” Dr. Perlberg says. “If someone calls me a dirty Jew there, will I be able to fight back?”

They left from Marseilles on board Ha’atzmaut (The Independence), bound for Haifa, Israel. It was dark when they docked on the evening of May 9, 1949. A few lights flickered on Mount Carmel.

Another passenger handed him a monocular. As he gazed through it, his eye caught the only house atop the forested hill. At that same hour, a 10-year-old girl named Raya was standing on the balcony of that fine white home, looking through her monocular at the arrival of The Independence.

The pair met years later, fell in love, and married within three months.

“With a surgeon, you know one way or the other immediately,” says Raya.

Dr. Perlberg had been almost five when the war ended. Keenly aware that in another generation we will have only the videos and writings of Holocaust survivors, he offers this advice:

“My mother used to say, ‘People don’t know what they have until they don’t have it anymore.’ That was her motto and it was so accurate. People in Israel don’t realize how incredibly fortunate they are to live in our secure country. My cousin in Belgium says sometimes he is scared to walk in the streets without removing his kippah. I am not prepared to live under such circumstances. We travel quite a bit to some amazing places. But I always return to Israel. It’s our home.”