From Moscow to Jerusalem: A Winning Partnership with Forbes and Christies to Benefit Children at Hadassah 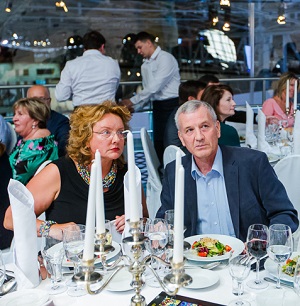 Hadassah International, in partnership with Forbes, Christie’s Auction House, and the Israel Embassy in Russia, launched its first Russian fundraising event at the new Jewish Museum and Tolerance Center in Moscow on Thursday evening, June sixth.

Prof. Eitan Kerem, Head of Pediatrics at the Hadassah Medical Organization, represented the Hospital and emphasized the large number of Russian children being cared for at the Pediatric department at Hadassah.
The evening was moderated by the entertaining and vivacious celebrity, Igor Vernik and also by Regine Von Flemming, Chief Executive Officer of Axel Springer and Forbes, Russia.

The evening’s auction raised over $100,000 for the new Pediatric Intensive Care Unit on the Ein Kerem campus at Hadassah Medical Organization. Included in the auction lots sold was a private tea and tour of Christie’s in London with Viscount David Linley, Chair of Christie’s and nephew of the Queen of England.  The evening was sponsored by Constantine Luschenko, FDN Capital and Einer Energy.