From the Army to a COVID-19 Unit: A Hadassah Nurse on the Front Lines

...More than a HospitalCOVID-19Hadassah HospitalSpecial Stories about Hadassah Staff30 April, 2020 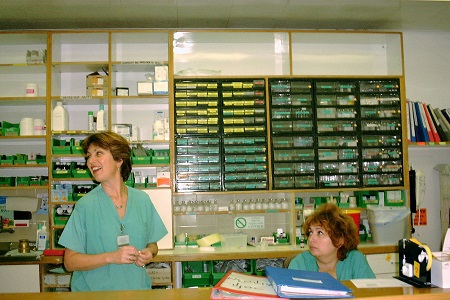 For Hadassah nurse Julie Benbenishty it was a particularly poignant moment when all Israelis paused in place for the two-minute siren marking Yom HaZikaron, Memorial Day for the fallen soldiers of Israel and victims of terrorism.

Benbenishty had first come to Israel from the United States as a teenager. Only 16 years old, she helped care for wounded army soldiers at Hadassah Hospital Ein Kerem. Now she is taking care of COVID-19 patients in one of Hadassah’s special outbreak units.

After finishing high school in Israel, Benbenishty attended the Hadassah-Hebrew University Henrietta Szold School of Nursing. Just nine days after she graduated, in 1978, she was drafted into the Israel Defense Forces (IDF). As an IDF nurse, Benbenishty covered a large swathe of the Jordan Valley, the border with Jordan patrolled by the IDF. She treated both soldiers and civilians who were setting up remote moshav cooperative communities and kibbutz collectives.

“There were neither government healthcare facilities nor health funds in the area,” Benbenishty says. “Every other day, I would go to each outpost or settlement and I’d run a clinic.”

Benbenishty had few resources at her disposal and often had to think on her feet. Once a class of junior-high students on a hike arrived at her clinic. All 30 kids were suffering from dehydration. She commandeered two army medics and, together, they used the few infusions they had for the most serious cases.

“I had to be careful not to give them too much to drink too fast because of the electrolyte imbalance it would cause. So, I pushed all the furniture out of the clinic, told them to lie down on the floor, and watered them down with a garden hose.”

When necessary, she served as the local veterinarian. “People would say, ‘My cow got caught on a fence and it’s got this wound.’ I thought to myself, ‘How different could it be from a human?’”

After serving in uniform, Benbenishty began working in Hadassah’s recovery room, where she treated both terrorists and terror survivors during the second intifada. Realizing that there was a lack of continuity of care once Palestinian patients treated at Hadassah returned to their local communities, Benbenishty, together with colleague Naela Hayik, established Nurses in the Middle East, a volunteer outreach organization that forged ties with the Palestinian nurses who would continue treating those patients after they came home.

Benbenishty’s work with the IDF continues today. As an expert study coordinator who recently earned a doctoral degree, she developed a five-day program for IDF paramedics to give them practical experience caring for real patients. “We figuratively move our setting in the hospital to a battlefield scenario,” Benbenishty explains. “I tell them to imagine the patient is an unconscious soldier in the field and that they should take note of how the doctors and nurses handle the body with care.”

She emphasizes that it’s not all medicine. “Most important,” she says to the paramedics, “you have to know how to talk to a wounded soldier on the battlefield. You need to say, ‘I’m with you. I’m not going to leave you.’ At Hadassah, we believe that if the soul is broken, if it’s not treated right, the body will die.”

On Yom HaZikaron, Benbenishty remembers those valiant soldiers she treated. And on Independence Day? “It’s a time of pure joy.”