From Treating Symptoms to Restoring Health: Parkinson’s Progress at Hadassah 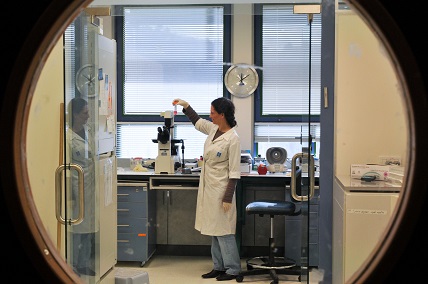 With the long-term goal of replacing lost neurons and restoring function permanently to patients with Parkinson’s disease, Hadassah Medical Center physician/researchers in the Human Embryonic Stem Cell Center are uncovering crucial factors that affect the success of stem cell therapy.

In Parkinson’s disease, progressive degeneration and loss of dopamine-producing neurons in the mid-brain cause motor and cognitive deficits, since dopamine is essential to the normal functioning of the central nervous system. Whereas current treatment for Parkinson’s disease can only alleviate symptoms, regenerative therapy using stem cells targets the production of new dopamine.

As Prof. Benjamin Reubinoff, head of the Stem Cell Center, explains: “To be able to produce a reasonable number of dopaminergic neurons from human embryonic stem cells, there is a need to refine some previously described protocols for directing the cells to differentiate.”

One of the factors Hadassah’s researchers are investigating is how the extracellular environment affects the process of differentiation. The culture plates, Prof. Reubinoff brings out, “provide an environment which is profoundly different from that of the intact soft tissue of the brain.” With this in mind, Dr. Sharona Even Ram from the Stem Cell Center developed a method to grow cells in modified 3D soft culture conditions and compared the results to those achieved using the hard plastic plates. Subsequently, they followed changes on the cellular and molecular level along the differentiation process. “Indeed we found that soft and hard substrates have different capacity of supporting neuronal maturation,” reports Prof. Reubinoff.

Another challenge that scientists face in the stem cell differentiation process in culture (in vitro) is that some of the cells retain what is called their “stemness.” In other words, they fail to mature, but at the same time they show high proliferation rates. These cells bear the risk of forming tumors after transplantation, which has been seen worldwide in animal models. Therefore, Prof. Reubinoff and Dr. Even Ram are investigating techniques to “clean the culture,” eliminating these cells before transplantation takes place.
Having characterized the changes in cell components that normally occur as stem cells differentiate, the researchers are able to identify specific elements that mature cells carry which endow them with increased resistance to toxic agents. They found that immature proliferating cells do not contain these elements, and therefore can be eliminated by specific toxic agents. One of the methods they are using, Prof. Reubinoff reports, has been recently patented in the United States.

A third issue that Hadassah researchers have tackled is the enhancement of the neuron’s survival once it has been transplanted to the host tissue.

A challenge in this step is that the compromised brain of the Parkinson’s patient may not provide a hospitable environment for the newly transplanted cells. To deal with this issue, they are working toward supplying extracellular materials that will enable the cells to attach to the host and survive, long-term. Prof. Reubinoff reports that Hadassah’s team is collaborating with a group from Tokyo, Japan to test materials for their ability to support neuronal growth and maturation, such as laminin peptides. They are also involved in a joint exploration with a group from Nottingham, United Kingdom to test biodegradable micro-particles as a cell delivery method, which would facilitate a slow release of growth factors–here again enhancing the cell’s survival potential. This is being tested in culture and in an animal model.

While there are clearly hurdles to overcome in ensuring the success of regenerative therapy for Parkinson’s disease, stem cells hold great promise for a transformation from treating symptoms to restoring health.