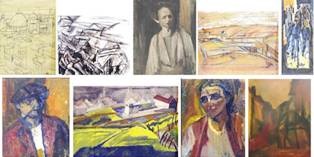 The sale of David Bomberg pictures at a Christies Auction in London on November 21, 2013 will contribute to the completion of the equipping of Hadassah’s $370million 19-storey surgical tower in Jerusalem which opened last year.
It is a continuation of the “Chagall Project” partnership between Hadassah and Christie’s. Through this collaboration sponsorship is offered to the beautiful stained glass windows of the Abbell Synagogue in the Hadassah Ein Kerem campus, and art works are donated for sale.
David Bomberg was one of the most audacious of the exceptional generation of artists who studied at the Slade School of Art. He painted a series of complex geometric compositions combining the influences of cubism and futurism in the years immediately preceding World War I. He was expelled from the Slade School of Art in 1913, because of the audacity of his breach from the conventional approach of that time. Bomberg moved to a more figurative style in the 1920s and his work became increasingly dominated by portraits and landscapes drawn from nature.
Bomberg died in 1956 and his work has undergone a renaissance in recent years. He was labeled as one of the greatest painters of the 20th century in the BBC series British Masters. His 1944 painting Evening in the City of London depicts the survival of St Pauls’ during the blitz of London and has been described as “most moving of all paintings of wartime Britain”.
It is unusual to have such a selection of works by one artist offered in a single sale. The paintings are all fresh to the market and offer a rare opportunity to own an original work by an important master of the 20th century. A significant part of the proceeds from this Bomberg sale will be donated to Hadassah.
Viewing will take place 17-20th November at Christie’s, King Street, London.
The sale will be held on November 21, 2013 at 10:30am London time.  Buyers from around the world are welcome to participate. You are invited to bid on-line.
Please would you forward this information to anyone you may feel may have an interest in this sale.
For more information please go to the Hadassah UK website at http://www.hadassahuk.org/news.asp?intID=255
and to http://www.christies.com/about/press-center/releases/pressrelease.aspx?pressreleaseid=6733