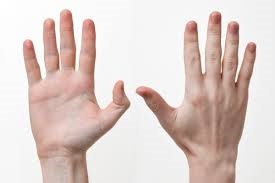 Researchers at Hadassah Hospital-Mount Scopus and the Hebrew University have discovered that our hands play a crucial part in perception of the space within their reach.

The researchers determined that, within this area, called “action space,” the position of objects is ordered inside our brains based on hand-centered coordinates. Our brains process these objects in relation to the positions of our own hands. The research team also found that when people lose either one or both of their hands, their perception in the action space is severely distorted.

The study involved asking participants who had amputations of either their left or right hand to look at a cross, displayed in the center of a computer screen. While they were focusing their attention on the cross, white squares briefly flashed on the right and left sides of the screen and the participants were asked to indicate which of the two was further away from the central cross. Both types of amputees tended to underestimate the distance of the squares from the cross. The findings have implications for rehabilitation. Therapy that emphasizes action on the amputated side may reverse this perceptual distortion, the researchers note. The study is presented in the January 2010 issue of Psychological Science.