Hadassah AustraliaNews from Our Units26 February, 2016 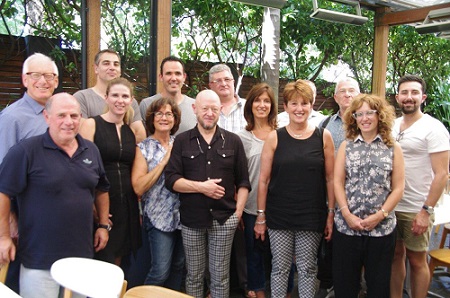 The new Hadassah Australia board of management met in February, charged with a sense of urgency. All of our key programs involve children, the most vulnerable group in Israel and the one that is bearing the brunt of the ‘lone wolf’ attacks by predominantly young Palestinians.

Most of these programs bear the distinct imprint of Australia:

Ron Finkel, the President of Hadassah Australia, said that on a per capita basis Australia is one of the most successful of the Hadassah International affiliates.

“Our message to the Australian community is that Hadassah Hospital is more than just a hospital and an outstanding example of what differentiates Israel from its neighbours.

“This is evidenced by Hadassah’s rich tradition of outreach in addition to its work as a principled centre for healing, teaching, and research.”

Comments from some participating Board members:

“It was great to be part of an enthusiastic, dedicated Board, full of fresh and innovative ideas and energy.”

“The conference was thought-provoking and inspirational. I was totally motivated by the passion of the speakers and feel totally committed to raising funds for a cause I believe is so worthwhile.”

“It reinforced my passion for the work of Hadassah and gave me a stronger sense of connectedness to the team across Australia.”

“It was inspiring to be amongst and work with such a high calibre, motivated group of people. Spanning multiple generations and having varied professional backgrounds and life experiences, our similar values and common goal were clear – improving Israel and building bridges through Hadassah’s unique initiatives.”

“It was a fantastic way for a volunteer board to bond and learn and get excited about the coming year. We need now to build on the momentum.”

“I was grateful to gain enormous knowledge simply from general  discussion on practical ways that we as committee members can pro-actively work both digitally and socially in our own circles and beyond to make that small difference in the world.  The weekend provided us with the inspiration to become more involved in giving on a day to day basis, as individuals in our own right, which is particularly important for our Hadassah NSW group until the captain of the NSW ship is chosen.   Both my husband and I found the presentation by Tracie Olcha truly inspirational.”