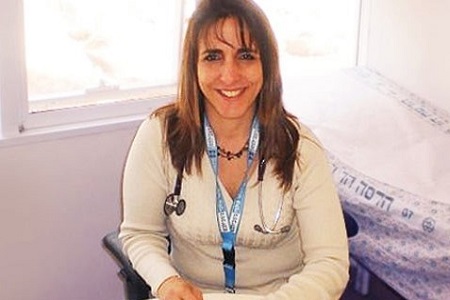 Dr. Malena Cohen-Cymberknoh, an Argentinian-born physician who specializes in cystic fibrosis (CF), always wanted to live in Israel. That dream became a possibility in 1999 when Intel offered her husband, Ariel, a computer engineering position at the company’s Jerusalem office. He was one of 400 candidates.

They arrived in the country on a fast day, the solemn ninth day of the month of Av. They had to adapt quickly—to the security guard who refused them entry to their absorption center at 10 o’clock at night because their name wasn’t on a list of new arrivals, to the bank clerk who told them they couldn’t open an account because Friday was a busy day.

While the couple was still living in the absorption center, their son had an asthma attack. During his treatment at the Hadassah Medical Organization, Dr. Cohen-Cymberknoh met Prof. Eitan Kerem, then a Hadassah pulmonologist, who went on to head Hadassah’s Division of Pediatrics. Prof. Kerem hired Dr. Cohen-Cymberknoh in 2004, after which she completed a pediatric residency at Hadassah.

Recently, she was appointed head of Hadassah’s multidisciplinary Pediatric Pulmonary Center, where CF patients have the opportunity to meet with endocrinologists, surgeons, angiographers, obstetricians, and gynecologists. Dr. Cohen-Cymberknoh notes, “Doctors used to refer to CF as ‘lethal cystic fibrosis,’ but with earlier detection and better treatment, patients are living longer lives.”

As she explains, “There are patients I’ve been seeing for 15 years. Some come every month or even every two weeks for treatment. When they get married or have children, I attend their celebrations. Today, we have a patient who is 73. He has a good life. This would have been unthinkable a generation ago.”