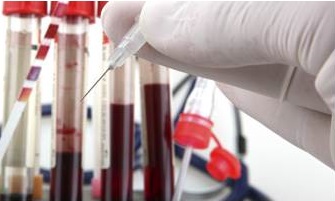 A new blood test that uses the DNA strands of dying cells to detect diabetes, cancer, traumatic brain injury, and neurodegenerative disease has been developed by researchers at Hadassah Medical Organization (HMO) and The Hebrew University.

In a study involving 320 patients, the researchers were able to infer cell death in specific tissues by looking at the unique chemical modifications (called methylation patterns) of circulating DNA that these dying cells release. Previously, it had not been possible to measure cell death in specific human tissues non-invasively.

The findings are reported in the March 14, 2016 online edition of Proceedings of National Academy of Sciences USA, in an article entitled “Identification of tissue specific cell death using methylation patterns of circulating DNA.”  Prof. Benjamin Glaser, head of Endocrinology at Hadassah, and Dr. Ruth Shemer and Prof. Yuval Dor from The Hebrew University of Jerusalem led an international team in performing the groundbreaking research.

Cell death is a central feature in health and disease. It can signify the early stages of pathology (e.g. a developing tumor or the beginning of an autoimmune or neurodegenerative disease); it can illuminate whether a disease has progressed and whether a particular treatment, such as chemotherapy, is working; and it can alert physicians to unintended toxic effects of treatment or the early rejection of a transplant.

As the researchers relate: “The approach can be adapted to identify cfDNA (cell-free circulating DNA) derived from any cell type in the body, offering a minimally invasive window for diagnosing and monitoring a broad spectrum of human pathologies as well as providing a better understanding of normal tissue dynamics.”

“In the long run,” notes Prof. Glaser, “we envision a new type of blood test aimed at the sensitive detection of tissue damage, even without a-priori suspicion of disease in a specific organ. We believe that such a tool will have broad utility in diagnostic medicine and in the study of human biology.”

Scientists have known for decades that dying cells release fragmented DNA into the blood; however, since the DNA sequence of all cells in the body is identical, it had not been possible to determine the tissue of origin of the circulating DNA.  Knowing that the DNA of each cell type carries a unique methylation and that methylation patterns of DNA account for the identity of cells, the researchers were able to use patterns of methylated DNA sequences as biomarkers to detect the origin of the DNA and to identify a specific pathology. For example, they were able to detect evidence of pancreatic beta-cell death in the blood of patients with new-onset type 1 diabetes, oligodendrocyte cell death in patients with relapsing multiple sclerosis, brain cell death in patients after traumatic or ischemic brain damage, and exocrine pancreatic tissue cell death in patients with pancreatic cancer or pancreatitis.

Support for the research came from the Juvenile Diabetes Research Foundation, the Human Islet Research Network of the National Institutes of Health, the Sir Zalman Cowen Universities Fund, the DFG (a Trilateral German-Israel-Palestine program), and the Soyka pancreatic cancer fund.