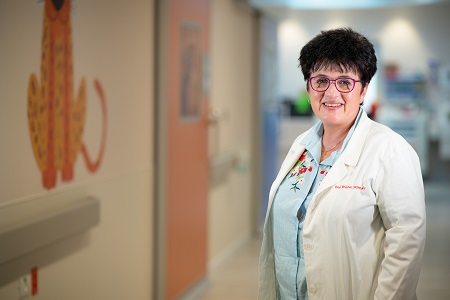 “Many of the hospital staff treating me used to be my patients. Now my life is in their hands,” relates Hadassah Medical Organization social worker Tali Rosen.

She speaks in a whisper, and it’s hard to hear her over the pinging of the spinning centrifuge that is separating her blood into plasma, red blood cells, and white blood cells. Her doctors need the white cells, the leukocytes, for a promising procedure that they hope will save her life.

Since Rosen’s job as a Hadassah social worker was a challenging one, she waved away the initial tiredness and aching bones she experienced. When repeated infections became more than a nuisance, she had herself tested. Rosen was diagnosed with multiple myeloma, cancer within the spongy bone marrow.
That was 15 years ago, and the disease is still incurable. Eventually, Hadassah’s oncology team ran out of treatments for Rosen, now a mother of five.

“Tali’s story inspired me to do something,” says Prof. Polina Stepensky, who heads Hadassah’s Department of Bone Marrow Transplantation and Cancer Immunology.

Rosen is now one of seven patients in an initial clinical trial of the first made-in-Israel CAR T immunotherapy treatment. The therapy, recently approved by the US Food and Drug Administration, marshals the patient’s own T-cells, white blood cells of the immune system. The cells are genetically engineered to include a “hunting” element that seeks out the cancer cells and destroys them. Called chimeric antigen receptors (CARs), these hunters bind to specific proteins and reprogram the T-cells to destroy the cancer.

The treatment is given alongside chemotherapy. Once enhanced, the CAR T-cells are infused back into the patient’s body to attack and destroy chemotherapy-resistant cancer cells.

Until now, this experimental therapy, employed particularly for multiple myeloma, has been available only in China and the US; in the US, it was restricted to Americans. The cost in the US is prohibitive: $400,000 per patient treatment. Prof. Stepensky’s team, the first in Israel to develop and manufacture its own CAR T cells, has managed to reduce the price tag drastically, making the treatment affordable for the estimated 100 to 120 Israelis who require it at any given time.

Inspired by the work of Memorial Sloan Kettering Cancer Center for Cell Engineering Director Michel Sadelain, Prof. Stepensky convinced Hadassah that her team could create a fully Israeli “blue and white” treatment. Within three years, her team, in collaboration with Prof. Cyrille Cohen at Bar-Ilan University, performed all in vitro and in vivo experiments, built laboratories and Good Manufacturing Process facilities, and received all the necessary approvals.

“The laboratory results are impressive,” says Prof. Stepensky, who is now hoping for similar results with patients like Rosen. Clinical trials are a slow process, she says, “but we achieved significant progress in three years, which is record-breaking time.”

Rosen, who has been through an emotional rollercoaster, notes, “Despite everything, the years of lengthy treatments and the disappointments, we carry on with life as normal.” When asked what advice the social worker Rosen would give the patient Rosen, she tears up. “I am good at giving others advice,” is all she says.

Prof. Stepensky explains that “the people in this clinical trial have tried everything else. They are seriously ill.” She anticipates that she’ll give her patients the CAR T treatment a few times and that “their cancers will become a chronic disease for them.”

While for now, Prof. Stepensky and her colleagues are treating only patients with multiple myeloma, she says that there could be many other applications for Car T treatment. “Once I take something on,” Prof. Stepensky emphasizes, “I see it through to the end for our patients. In my dream, we’ll create a facility that will develop cellular therapy for any type of cancer, for children and adults. For everything.”