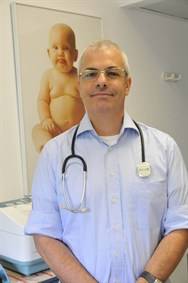 As you know, research is almost an obsession at Hadassah. Our doctors, nurses, technicians and medical students spend many hours practicing translational medicine – taking their patients problems into the labs and searching for solutions to conditions they confront daily – with the hope that what they learn and accomplish will result in better diagnostic tools, better medications and better treatments.

Dr. Itai Berger, Senior Neurologist in the Neuropediatric Unit, is just one of hundreds of examples of people and projects that are making a difference for children suspected of suffering from Attention-deficit hyperactivity disorder (ADHD).

ADHD is among the most common children’s neuro-developmental problems, but is often very difficult to diagnose. Doctors often prescribe Ritalin or other medications to treat the disorder, but, if the diagnosis is incorrect, the medications can cause further problems.

Until now, the standard method of determining if a child suffers from ADHD has been the American “Test of Variables of Attention.” However, it is difficult to be assured of the results as the test depends on the child’s cooperation with the tester, something these children are not always capable of doing. The tests presents geometric stimuli and targets and tasks that are boring and repetitive. As the test was developed in the United States, its cultural context makes it unsuitable for Israelis.

In conjunction with Neurotech Solution Ltd., a small high-tech company here in Israel, Dr. Berger and his Hadassah colleagues set out to create an effective test that would provide a more definitive Together they created an innovative computer program to evaluate the child’s reactions that has proven more accurate than subjective assessments by teachers, parents and psychologists.

Their program, “The Continuous Performance Functions Test” (CPF), includes sounds and images. It is based on an arithmetic algorithm and measures attention, impulsivity, hyperactivity, reaction time and all combinations of those responses.

“The response of a child to the visual stimuli presented on a computer screen, produces a very interesting and exact attention profile,” Dr. Berger said. “The stimuli and tasks are age appropriate, so the test  can even assess an adult suspected of having ADHD.

“When the results are analyzed, users can be categorized into 12 different subtypes. The Diagnostic and Statistical Manual of Mental Disorders gives only three subtypes of ADD/ADHD, which makes our test much more accurate,” Dr. Berger said.

He and his colleagues administered the test to 58 children from six to twelve years old: 45 of them had already been diagnosed as having ADHD; 13 were children without ADHD who served as a control group. The CPF test was able to differentiate between children with and without ADHD, proving it to be reliable and valid.

However, As Dr. Berger wrote in the Israel Medical Association Journal, more research is needed to develop improved assessment modalities that can be used to reach am even more definitive ADHD diagnosis. He noted that international studies are underway in the American state of Wisconsin and in Utrecht and Niijmegen in Holland – and that research at Hadassah team is continuing.

Since the CPF test is Internet based, when the research results are examined and the test perfected to its developers standards, it will be able to administered around the world on an online computer.

Time and time again, around the world, Hadassah has been acclaimed for innovation and insight, for using creativity to effect curing. With its accurate and sophisticated diagnoses, the CPF test will help ensure that fewer children will be inappropriately diagnosed and medicated – and that those children with ADHD receive appropriate medication and individualized treatment.

As in the past, we are proud to share this latest innovation with you and know you will delight in this new development, which will play an important role in helping diagnose children with neuro-developmental disorders.