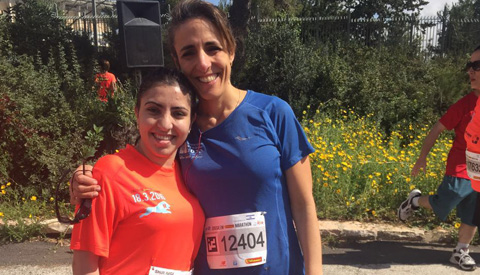 “I may come in last, but I’ll get to the finish line,” said Shir Bibas, 24. As it turned out, she came in far from last.

What’s her secret? Her strong determination and the encouragement of her doctor, who ran alongside Shir during the marathon.

Shir Bibas is a patient at Hadassah Hospital Mount Scopus. Her doctor, Hadassah’s pediatric pulmonologist, Dr. Malena Cohen, volunteered to run 10 kilometers in the Jerusalem Marathon with her. Shir was born with Cystic Fibrosis (CF), a genetic lung disease, although she lived in the south of Israel, her condition required advanced treatment, which led her to Hadassah Hospital Mount Scopus’ CF unit in the Elie Douer Family Center for Pediatric Genetic and Chronic Diseases ten years ago.

“Dr. Cohen is more than a doctor to me,” said Shir. “She came to my wedding!”

“When I suggested running the half-marathon to her, she said there was no way she would make 10 k with her breathing problem. I told her I’d be there running with her and we’d make it to the finish line together,” Dr. Cohen commented.

“I don’t like running,” says Shir. “It makes me cough stuff up. But I have to run for my health.”

“That’s exactly why it’s good for her,” replied Dr. Cohen. “We have 140 patients and we encourage them to exercise. Of course, they can’t all do a marathon. There are two famous cases of patients abroad finishing a marathon, but they may have had a far less severe case of CF than Shir.”

The two women finished the 10 kilometers in the Jerusalem Marathon and shared giant hugs afterwards. “It wasn’t easy for Shir,” said Dr. Cohen. “But she made it and felt wonderful. I felt ebullient, too. Her Dad was waiting for us at the end of the run and it was hugs all around.”