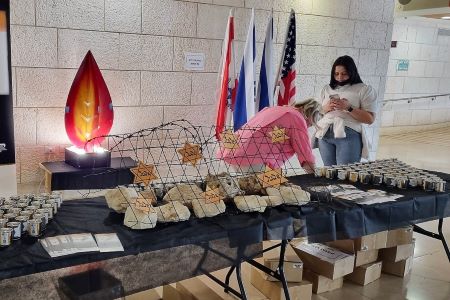 His grandmother was a physician in the Warsaw ghetto in Poland, working under impossible conditions to give health care to the internees. She was shot by the Nazis. His grandfather, also a physician was captured and spent five years as a prisoner of war while serving as a doctor in the Polish army. His father was smuggled out of the ghetto by righteous gentile Irene Sendler, just days before the 1943 Warsaw Ghetto Uprising, a revolt by Polish Jews, under Nazi occupation, against the deportations from Warsaw to the Treblinka extermination camp. He survived in a monastery.

After the war, Prof. Muszkat’s father was reunited with his grandfather in pre-state Israel. Prof. Muszkat and his three siblings grew up in Rehovot, where his father worked as a Weizmann Institute professor of chemistry.

“Holocaust survivors didn’t seek revenge,” comments Barbara Sofer, Israel Director of Public Relations at the Hadassah Offices in Israel. “They sought to build new lives and a better world. Some of their offspring save lives at Hadassah’s two hospitals 365 days a year.”

Tel Aviv Chief Rabbi Israel Meir Lau teaches that the commandment to “Remember Amalek,” the ancient biblical nation that launched an attack on the Jewish people after their exodus from Egypt, is followed by the seemingly redundant, “and don’t forget.” The intent, he explains, is to convey the need “to take action.”

That, says Sofer, is Hadassah’s message.