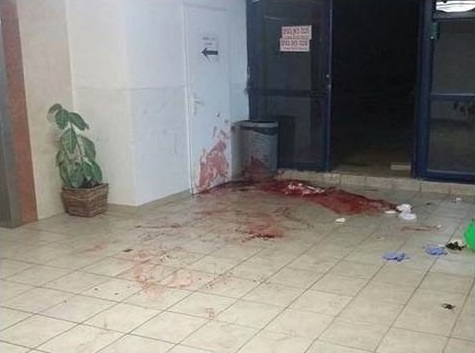 Patient Tzvika Cohen, 48, a security guard at the Maale Adumim Mall who was hit on the head with a hatchet at 1AM on February 26, 2016, remains in critical condition in the neurosurgical intensive care unit at Hadassah Ein Kerem. He is intubated and on a breathing machine, fighting for his life. He was operated on by Dr. Zvi Israel of the Hadassah Department of Neurosurgery.

Tzvika Cohen is married and a father of four. One of his son’s is scheduled to be Bar Mitzvah in two weeks. Cohen worked as a body guard in a private company and was filling in for a friend who was supposed to be guarding the entrances to the mall in Maale Adumim.  The terrorist, employed at the mall in a food service, is a 21-year old man from Azaria, near Maale Adumim. He had permission to be there because of the extra work needed to be done on Thursday night before the Friday shopping rush before Shabbat.  He attacked Cohen in the mall.

Cohen’s brother Rachamim Cohen, a cab driver, was a Hadassah patient in 2000, after suffering multiple stabbings by a terrorist. Back then, Prof. Avi Rivkind, Head of the Trauma, received Rachamim Cohen in the trauma center.  Last week, Prof. Rivkind met the family once again after Tzvika’s surgery, to give them the difficult report.

“Lighting has struck us twice,” says Batia Cohen, their mother.