Hadassah Embraced At 27 Visits in Monterrey and Mexico City 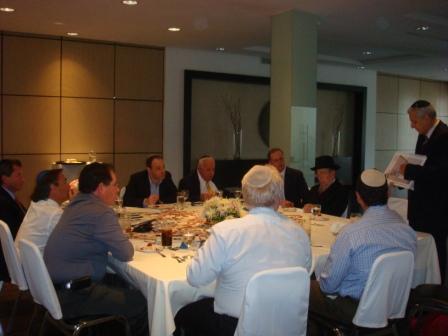 The Mexican Jewish communities of Monterrey and Mexico City warmly welcomed Hadassah Medical Center Director General Prof. Shlomo Mor-Yosef and Hadassah International volunteers and staff in September, proving eager to learn more about the work of Hadassah and to explore the potential for collaborations between Hadassah and medical institutions in their home cities.

“The members of these communities are enthusiastic about being partners in building the future of medicine at the Hadassah Medical Center,” notes Hadassah Mexico Director Ethel Fainstein.  “They were so helpful to us in opening doors for Hadassah because they wanted others in their community to become familiar with its trailblazing work.”

In a little over 24 hours in Monterrey, Prof. Mor-Yosef was able to strengthen friendships and build new ones with influential members of the Jewish community and key physicians.  Mexico’s relationship with Hadassah has been growing through the years thanks in part to the over 20 Mexican physicians who trained at Hadassah and returned to take up key positions in the Monterrey health care system.

Among the members of the Monterrey community Prof. Mor-Yosef met with were HE Miguel Schwarz, Honorary Consul of Israel and Member of the Board of the Tecnológico de Monterrey, and Dr. Genaro Levinson, President and Director of the Organization Clinic Americas (OCA), a prestigious private hospital and research center.  Dr. Levinson is building a new inpatient facility at OCA and gave Prof. Mor-Yosef a tour of the construction site.   The relationship between the two began a few years ago when Dr. Levinson visited the Hadassah Medical Center.  He returned for a second visit this past May and invited Prof. Mor-Yosef to Mexico.  Prof. Mor-Yosef and Dr. Levinson  have been discussing potential collaborative research projects between Hadassah and OCA.

Prof. Yossi Caraco, head of the Hadassah Medical Center’s Clinical Pharmacology Unit and Clinical Research Center, will be traveling to Monterrey to begin working with Dr. Levinson to set up collaborative clinical trials in pharmacology.  Dr. Caraco’s area of research is pharmacogenetics with special focus on how genetic data could be incorporated into a patient’s care in the area of anticoagulation.

While in Monterrey, Prof. Mor-Yosef also had the honor of meeting with President of the Jewish Community Center Jamie Drucker and Senior Monterrey Rabbi Moises Kaiman, who were most encouraging and enthusiastic about the building of the new Sarah Wetsman Davidson Tower at Hadassah.  A key advantage of Prof. Mor-Yosef’s visit was the opportunity to present the Sarah Wetsman Davidson project personally to potential supporters and explain the pivotal role this new inpatient facility will have in bolstering the future health of Jerusalem.

In Mexico City, thanks to months of prearrangements made by Mrs. Fainstein, Hadassah Mexico President Claris Dabah, and the members of the Board of Directors, Hadassah International Liaison Barbara Sabin, Hadassah Consultant Doug Smith, and Mrs. Fainstein were successful in holding 26 meetings with local friends and potential friends of Hadassah, including prominent chief executive officers and other influential businessmen and decision makers, attorneys, architects, and physicians.  They also hosted a special dinner with the Hadassah Mexico Board of Directors and a lunch with a group of young entrepreneurs—all in the course of three and a half days!

“The response of the community was very inspiring and energizing for me,” relates Mrs. Sabin “because I was able to see and feel the excitement that our meetings generated.”  A number of young professionals who are planning a trip to Israel, she notes, have now decided to include the Hadassah Medical Center in their itinerary.

“Once they see, with their own eyes, the amazing work at our hospital,” Mrs. Sabin comments, “they will be further inspired.”

Mrs. Sabin and Mrs. Fainstein noted too that the people were so happy to share their suggestions about possible future collaborations between Mexico’s medical institutions and Hadassah.  As Mrs. Fainstein explains, when the Hadassah Medical Center shares its medical expertise with Monterrey and Mexico City health professionals, the community comes to know Hadassah and the brand of Hadassah gains greater visibility. Among the collaborations being suggested are exchanges of information in the field of trauma medicine, as well as joint ventures involving telemedicine.  Hadassah Mexico is helping to facilitate exploration of possible ongoing collaborative health projects with the Mexico Health Foundation, a prestigious philanthropic foundation in Mexico City.

Looking back on the whirlwind visit, Mrs. Sabin comments, “I know that the friendships we have forged will strengthen in the future as recognition of the Hadassah Medical Organization’s role in advancing medicine continues to grow.”