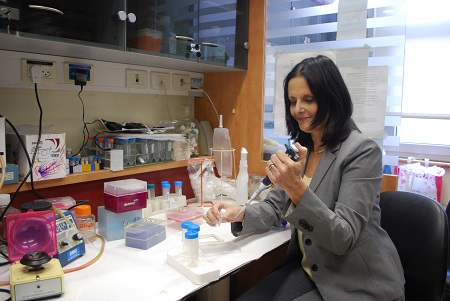 Shoshana was playing with her two toddlers when she felt an intense pain in her back. Just by picking up one of her children, she had broken four bones.

The cause of the fragility of her bones was type 1 diabetes. While Shoshana’s case is unusual for someone so young, Prof. Rivka Dresner Pollak, head of the Department of Endocrinology and Metabolism at the Hadassah Medical Center, says it typifies the risk of bone fractures for diabetics. Just by reaching up to take something off a high shelf or coughing excessively, diabetics can break bones.

Together with Prof. Lynne Cox of the University of Oxford, Prof. Pollak was recently awarded funding for a pre-clinical joint project to explore why type 1 diabetics are far more likely to have fragile bones than non-diabetics as they age. The two colleagues will also develop treatments to minimize the risk of fractures.

Between 20 and 30 percent of older type 1 diabetics who fracture a hip die within a year of the accident. A broken hip significantly reduces mobility, at times leaving patients bedridden. As a result, they are at risk for developing pneumonia because they are not breathing as well. Often, they are hospitalized, exposing them to other infections.

In addition, individuals who are more susceptible to breakages are already in poorer health and, therefore, their demise is not unexpected.

“It’s great that diabetics are living longer, but we need to ensure they have quality of life,” comments Prof. Pollak. Jerusalem born, Prof. Pollak studied medicine at the Hadassah-Hebrew University School of Medicine. With gerontology and diabetes as her areas of expertise, she became increasingly aware of diabetic osteoporosis and began searching for a solution. That eventually led her to team up with biochemist Prof. Cox.

For years, doctors have known that diabetics can face the eye, kidney, nerve, heart, and other medical problems. In the last few years, however, the brittle bones of aging type 1 diabetics have led to more focused attention on bone weakness as well.