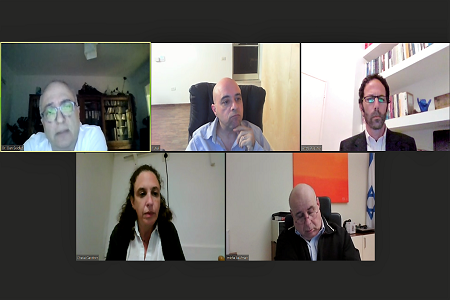 In response to a request for help in creating an optimum protocol to vaccinate nursing home residents, the Hadassah Medical Center, in collaboration with Hadassah International, offered a webinar on January 11 to the director, Micha Kaufman, and medical director, Dr. Dan Seidler, of Vienna’s Maimonides Zentrum home for the aged.

The webinar featured Dr. Yuval Tal, head of Hadassah’s Immunology and Allergy Medical Unit and one of the physicians responsible for the vaccination process, along with American-born nurse Chava Gardner, a vaccination coordinator. The outreach in Vienna is part of an HI initiative, spearheaded by Director of Special Projects Andy Wiesner, to reach out to the Jewish communities of Europe to forge connections. Maimonides Zentrum was particularly interested in learning how HMO is managing vaccination logistics as well as what factors to consider when deciding whom to vaccinate.

Commenting that “this is probably the best vaccination ever developed by human beings,” Dr. Tal reported that as of the date of the webinar, Hadassah had vaccinated 10,000 people. Offering reassurance that “most people can get the COVID-19 vaccine,” he noted that out of the 10,000 people vaccinated at Hadassah, only a few had reactions, and these were mild. With the second dose, Dr. Tal explained, stronger side effects can occur, such as stomach aches, headaches, or fever, but these resolve within 48 hours.

At the same time, Dr. Tal cautioned that “certain groups of patients need special consideration.” For example, Gardner elaborated, those who have allergies and use an Epi-Pen (epinephrine autoinjector) are watched for a half-hour post-vaccination, rather than the usual 15 minutes. Sometimes people with hypersensitivities are referred to Hadassah’s allergy center to receive their vaccination.

In terms of vaccination logistics, Gardner explained that Israel’s Ministry of Health delivers the Pfizer vaccines to Hadassah’s pharmacy. From that moment, Hadassah has about five days to inject the vaccines. In addition, once the vaccines are removed from refrigeration, they must be used within six hours. Knowing the viability of the vaccine and how many vaccines they received, the staff then figures out how many appointments to schedule. Gardner reported that they have been vaccinating about 900 people a day, typically using two to three large rooms at the hospital. “The fact that the vaccine does not have any preservatives is a limitation because, once you open it, you have x amount of time to use it. So it is a little bit stressful, but, up until now, we have not thrown away one dose.”

Gardner related that, depending on the time of day, there are between two to six nurses involved in the vaccination process. The nurse takes a vial of vaccine out of the refrigerator, shakes it very gently, injects 1.8 ccs, aspirates the air, shakes it gently, and writes the time on the vial, which will now provide six injections. The whole process of preparing and giving the vaccine takes about 10 minutes, she said.

Wiesner concluded the webinar by expressing Hadassah’s great pleasure in being able to help other Jews around the world—a tradition of the Jewish people.